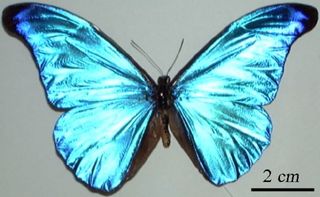 Long before engineers sought to create microscopic devices that manipulate light for electronics, known as photonics, Nature had developed animals that reflect light with smaller and more complex structures than any manufactured by man.

New research shows that the wings of the morpho rhetenor butterfly reflect its brilliant blue colors not from pigment but from extremely small scaffolding within the scales of the butterfly's wings.

These types of structures represent a sophisticated level of complexity researchers someday hope to attain through biomimetics, engineering that mimics the natural world.

"The reason for studying the structure on the wings of [M. rhetenor] was that it has strong similarities to the photonic crystals already fabricated," said Luca Plattner, who did his doctoral thesis at the University of Southhampton. "I was able to explore a biomimetic process, one in which we can learn new lessons from Nature which are beneficial to both engineers and entomologists."

Plattner's work will be published Nov. 22 in the Royal Society's Interface magazine.

In the same way we see a variety of colors an oil-covered puddle of water, because of light reflecting at different depths, light rays bouncing off M. rhetenor scales are refracted at varying angles and depths.

Structures in the scales change the wavelength of light that's reflected and are why we see such vibrant hues that alter with only a slight movement of the wing. In the visible spectrum of light, red colors have a longer wavelength and blue and violet are shorter. When the wings reflect colors outside our visible spectrum, we see only the brown color of the underlying tissue.

"In photonics, we want to understand the ways Nature has developed to control the flow of light," Pete Vukusic of Exeter University told LiveScience. "Any optical technology that requires this may one day benefit from some sort of biomimetic input."

Butterflies may have such complicated colors so they can communicate at a distance, scientists say: Females see males up to half-mile away. And a male's brilliance can deter other males from entering their territories.

"Biologically speaking, there's just as much of a story to tell about the evolution of the nanostructures," said Vukusic, who is working on a separate research project. "Even subtle differences such as flight height within the forest canopy can create differences in available light levels for use in communication, influencing wing color brightness and visibility development."

Butterflies are not the only species to use light reflection in their survival and evolutionary plan. There are beetles, dragonflies, and moths that may have developed even more intricate ways to manipulate light that scientists are just starting to investigate.

"Nature always seems to have an extra level of complexity, certainly in optical terms, somewhere up her sleeve," Vukusic said.