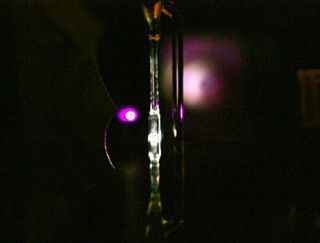 The main light source of the future will almost surely not be a bulb. It might be a table, a wall, or even a fork.

An accidental discovery announced this week has taken LED lighting to a new level, suggesting it could soon offer a cheaper, longer-lasting alternative to the traditional light bulb. The miniature breakthrough adds to a growing trend that is likely to eventually make Thomas Edison's bright invention obsolete.

LEDs are already used in traffic lights, flashlights, and architectural lighting. They are flexible and operate less expensively than traditional lighting.

Michael Bowers, a graduate student at Vanderbilt University, was just trying to make really small quantum dots, which are crystals generally only a few nanometers big. That's less than 1/1000th the width of a human hair.

Quantum dots contain anywhere from 100 to 1,000 electrons. They're easily excited bundles of energy, and the smaller they are, the more excited they get. Each dot in Bower's particular batch was exceptionally small, containing only 33 or 34 pairs of atoms.

When you shine a light on quantum dots or apply electricity to them, they react by producing their own light, normally a bright, vibrant color. But when Bowers shined a laser on his batch of dots, something unexpected happened.

"I was surprised when a white glow covered the table," Bowers said. "The quantum dots were supposed to emit blue light, but instead they were giving off a beautiful white glow."

Then Bowers and another student got the idea to stir the dots into polyurethane and coat a blue LED light bulb with the mix. The lumpy bulb wasn't pretty, but it produced white light similar to a regular light bulb.

The new device gives off a warm, yellowish-white light that shines twice as bright and lasts 50 times longer than the standard 60 watt light bulb.

This work is published online in the Oct. 18 edition of the Journal of the American Chemical Society.

Until the last decade, LEDs could only produce green, red, and yellow light, which limited their use. Then came blue LEDs, which have since been altered to emit white light with a light-blue hue.

LEDs produce twice as much light as a regular 60 watt bulb and burn for over 50,000 hours. The Department of Energy estimates LED lighting could reduce U.S. energy consumption for lighting by 29 percent by 2025. LEDs don't emit much heat, so they're also more energy efficient. And they're much harder to break.

Other scientists have said they expect LEDs to eventually replace standard incandescent bulbs as well as fluorescent and sodium vapor lights.

If the new process can be developed into commercial production, light won't come just from newfangled bulbs. Quantum dot mixtures could be painted on just about anything and electrically excited to produce a rainbow of colors, including white.

One big question remains: When a brilliant idea pops into your mind in the future, what will appear over your head?