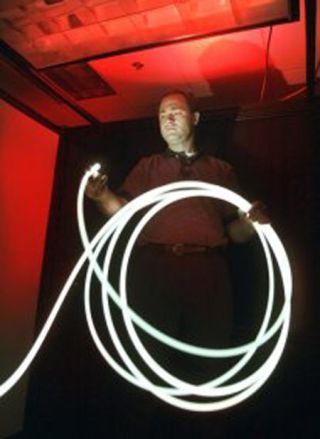 With hybrid cars making waves in the auto industry, hybrid solar lighting might be the next big splash - combining the benefits of sunlight with the consistency of traditional electric lighting.

"Our idea was: let's just pipe the sunlight into the building," said Duncan Earl, a researcher at Oak Ridge National Laboratory.?

During times of little or no sunlight, HSL light fixtures use electricity to provide a constant amount of illumination.?

If used in a top-floor of a building, HSL can deliver 50 percent of collected sunlight as indoor lighting, Earl told LiveScience in a telephone interview.?

This is far more efficient than photovoltaic cells, which convert about 15 percent of sunlight into electricity and then have to change this electricity back into light.? Since light bulbs lose a lot of energy in the form of heat, the end-result is only about 2 percent of the sunlight gets used.

Besides the more direct use of sunlight, HSL light fixtures generate less heat than conventional bulbs, which can mean less energy spent on air conditioning.? HSL also provides a full spectrum of light - as compared to fluorescent bulbs that only emit at certain frequencies.?

Full spectrum natural light may have health benefits - as well as retail advantages.?? One study showed that stores with natural light could boost their sales by 40 percent.

HSL is being marketed to commercial buildings, where lighting can be the biggest chunk of the electric bill.? Residential uses may be farther down the road, since the cost advantages are not as great.

HSL technology uses rooftop collectors - four-foot-wide mirrored dishes - that track the Sun with the help of GPS chips. The collectors focus the sunlight onto 127 optical fibers, bundled into a single chord as wide as a quarter.?

"It is a very cool light - you can touch the fibers with your hands," Earl said.? This is because the collectors remove the infrared light - the part of the spectrum that generates a lot of the heat in conventional bulbs.?

The hybrid light fixtures do use artificial means to generate light.? Photosensors automatically adjust how much electric current is needed to keep a room uniformly bright.

"On a sunny day, we can pull in enough sunlight to offset 80 percent of the artificial light," Earl said.

If the Sun is blocked by a dark thundercloud, the piped-in sunlight will drop to only about five percent of a room's lighting needs.?

The optical fibers also lose light the longer they are.? Therefore, it only makes sense right now to use HSL in rooms with direct roof access.

The concept for hybrid lighting has been around since the early 1970s, but it has been difficult to make the technology practical.

Japanese researchers previously developed solar collectors with glass optical fibers - which are more heat-resistant, but also more expensive and harder to work with.? According to Earl, the glass set-up cost around $40,000 to illuminate 10,000 square feet.?

Earl and his collaborators have cut down on costs by using plastic optical fibers - as well as plastic mirrors.? They are still in the prototype stage, but they hope to get the price to $3,000 for 10,000 square feet.?

"We are not at that level yet," Earl admitted.

If they can reach their goal, a building owner in Hawaii could pay for implementing the new technology in 2-3 years, with the savings on electricity bills.? In other parts of the country, where sunlight is reduced and utility costs are less, this payback would take longer.???

"The cost has to come down for the northern parts of the country," Earl said.?

Oak Ridge National Laboratory has done some field tests with HSL.? In one of these tests, the researchers realized that the sunlight coming from the collectors had a noticeable reddish tint during sunrise and sunset.

"We originally thought this might be a problem, but we found that people really liked it," Earl said.? "They would come in maybe a little sleepy, and they appreciated having the softer reddish color. And then in the evening, the red tint would say, 'Hey it's time to go home.'"

There have been studies that show that natural light is important for setting our body's internal rhythms.? Some doctors also attribute Seasonal Acquired Depression to a lack of full-spectrum natural light.

But perhaps, most surprising is the fact people buy more in a sunlit store.? In 1999, the California Board for Energy Efficiency had a study done on the relationship between retail sales and the presence of skylights.? The results showed a 40 percent increase in sales due to natural lighting.

The sales boost may be attributable to a feeling - expressed by some shoppers - that full spectrum light makes the store seem cleaner and more spacious.???

Knowing that this 40 percent increase is a strong selling point, Earl and others have created a spin-off company, called Sunlight Direct, which is marketing HSL to retailers.?? They offer the new technology as an alternative to skylights, which can leak and fluctuate in brightness.

"We're saying here's a way to get all the convenience of artificial light, with all the benefits of natural light," Earl said.