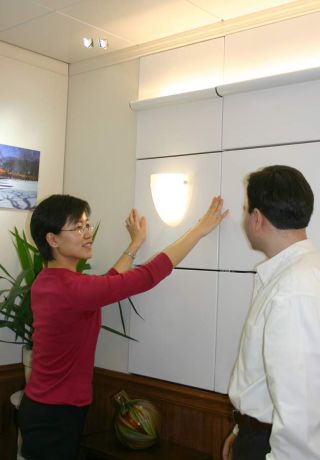 The LED panel can be swapped with other non-lit panels on the electronic wall. RPI's Lighting Research Center/Dennis Guyo

Electronic walls and ceilings with interchangeable LED panels would allow you to change room lighting at a whim, in a new design proposed today.

The modular panels snap in and out of an electrical grid so light "fixtures" can be moved anywhere.

"The new concept represents a paradigm shift in the way people think about lighting and the way we build and design interiors," said Nadarajah Narendran, director of the Lighting Research Center (LRC) at Rensselaer Polytechnic Institute.

While the public will have some say in whether any paradigms shift, the idea does represent a new twist to Edison’s old bulbs.

The panels use light-emitting diode (LED) technology, which has emerged recently as a viable alternative to the standard white bulb. Colorful LED lights have been around for years. But only lately have scientists figured out how to make them produce the yellowish-white preferred for room lighting.

LEDs produce twice as much light as a regular 60-watt bulb and burn for more than 50,000 hours. The Department of Energy estimates LED lighting could reduce U.S. energy consumption for lighting by 29 percent by 2025. LEDs don't emit much heat, so they're also more energy efficient.

LED lighting might replace some bulbs in the short term, researchers say. But the success of the whole-room concept proposed today would require wholesale changes in the way future buildings are constructed.

"In the long term the very nature of construction and buildings will go through a change, the way it did during the transition from gas to electric lamps," said Makarand Chipalkatti, a manager at Osram Sylvania, the lighting company and a sponsor of the research. "To truly realize the full potential offered by LEDs in lighting and architecture, we must invest our thinking and resources in the area of new infrastructure and standards."