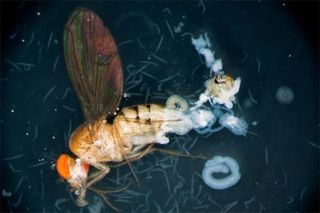 A certain fly species has adopted an alternative form of evolution – passing along beneficial bacteria to its offspring. The symbiotic bacteria have spread just like a beneficial genetic mutation would. Here, a microscope image of drosophila fly with parasitic nematode and its offspring. Nematodes have a more difficult time growing and developing in flies that are infected with the "good" bacteria called Spiroplasma.
(Image: © J. Adam Fenster, University of Rochester)

When faced with the threat of disease, organisms are often forced to evolve or perish. Traditionally, scientists have observed that such adaptation occurs though changes to an organism's genes. But one fly species has opted for an alternative solution — get a friend to help you out.

In these flies, Drosophila neotestacea, a certain bacteria protect them from a worm parasite. Without the bacteria, this parasite often renders female flies infertile.

Turns out the bacteria are passed on from mother to offspring, and the favorable bacteria have spread through the fly population in eastern North America like wildfire.

This is the first time scientists have observed a beneficial organism — known as a "symbiont" because of the symbiotic relationship between the microbe and its host — sweeping through a population just like a favorable genetic mutation would, the researchers say.

"Normally, you'd think that a species would evolve resistance [to disease] using its own genes, but in this case they evolved resistance by spread of this symbiont," said study author John Jaenike, a biologist at the University of Rochester in New York.

But the scientists don't think they've stumbled upon some sort of evolutionary anomaly. Rather, they suspect this specific form of adaptation occurs quite often — we just don’t see it.

"You go out in the wild and you see trees and birds and flowers and frogs and things like that, but you don’t see the symbionts, you don't see the parasites," Jaenike said. "It could be that beneath the surface of what's going on out in the wild, there could be all kinds of strong and bizarre interactions between species going on perpetually," he told LiveScience.

The results will be published this week in the journal Science.

In recent years, scientists have documented several cases of insects, including aphids and flies, passing on bacteria to their offspring.

With Drosophila neotestacea, the beneficial bacteria, known as Spiroplasma, somehow get into the mother's eggs so that when the eggs are laid, they are already infected with the bacteria, Jaenike said.

Jaenike and his collages examined whether Spiroplasma might confer protection against a certain species of nematode, a common parasitic worm. The nematodes often prevent female flies from producing eggs.

Both in the laboratory and in the wild, Spiroplasma protected the female fly's fertility. Flies infected with nematodes were 10 to 11 times more fertile if they also had the Spiroplasma bacteria in their bodies compared to those without the bacteria. The bacteria protect the flies by preventing the worm from growing properly.

The researchers also found that the frequency of Spiroplasma infection in these flies has increased rapidly over the last 20 years, presumably because it provides the flies with an evolutionary advantage. In the 1980s,Spiroplasma was present in only about 10 percent of these flies in eastern North America, while in 2008 the infection rate was up to 80 percent.

"I was completely flabbergasted how fast it occurred," Jaenike said. He was equally astounded to have caught this change that occurred over just two decades, which is really a "split second in evolutionary time," he said.

The researchers speculate that these nematodes have only recently colonized North America, which would explain why the evolutionary change in the files happened now as opposed to many years ago.

They also suspect the beneficial bacterial infection is spreading from east to west across the continent and will conduct further research next year to confirm whether or not this is indeed happening.

The findings might also have implications for human disease control.

Some species of nematodes cause disease in humans, including river blindness and elephantiasis. River blindness is a major cause of blindness in West and Central Africa. Elephantiasis, which can lead to the enlargement of body parts, affects millions of people in tropical and subtropical areas. These diseases are transmitted from person to person through insects including black flies and mosquitoes.

"If Spiroplasma had an adverse effect on nematodes inside mosquitoes and black files the same way it does in Drosophila, then Spiroplasma could conceivably be used as a mechanism to control the spread of these diseases, which infect tens of millions of people in tropical regions," Jaenike said.

The study was funded by the National Science Foundation.