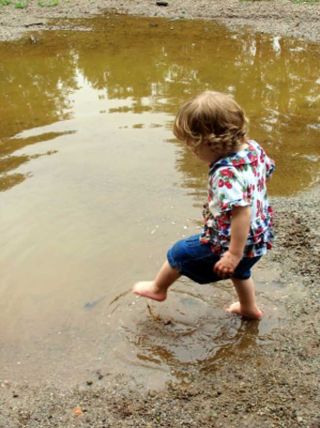 A new study suggests that exposure to common germs during childhood may help fortify the immune system.

Exposing kids to nasty germs might actually toughen them up to diseases as grown-ups, mounting research suggests.

A new study suggests that higher levels of exposure to common everyday bacteria and microbes may play a helpful role in the development of the body's inflammatory systems, which plays a crucial role in the immune system's fight against infection.

"Inflammatory networks may need the same type of microbial exposures early in life that have been part of the human environment for all of our evolutionary history to function optimally in adulthood," said Thomas McDade, a professor of anthropology at Northwestern University and lead author of the study.

The investigation focused on how various early childhood environments affected levels of C-reactive protein (CRP), which rises in the blood because of inflammation. C-reactive protein is also considered by researchers to be a predictor of heart disease, independent of lipids, cholesterol and blood pressure, though the association has been disputed.

While earlier studies have been conducted in relatively affluent settings such as the United States, the researchers were interested in how C-reactive protein production differed in a country like the Philippines, a population with a high level of infectious diseases in early childhood, but low rates of obesity and cardiovascular diseases when compared to Western countries.

The researchers used data collected from a study that began in the early 1980s and tracked 3,327 Filipino mothers in the third trimester of pregnancy. The mothers were interviewed about childcare behaviors, and their homes were assessed in terms of hygiene (whether domestic animals roamed freely) and socioeconomic resources. Researchers also followed up with the children from such pregnancies every four or five years until the kids reached their early 20s.

Blood tests showed that C-reactive protein was at least 80 percent lower for study participants in the Philippines when they reached young adulthood, relative to their American counterparts, even though the Filipinos suffered from many more infectious diseases as infants and toddlers. CRP concentrations for Americans in their early 20s were on average around 1 to 1.5 milligram per liter, while Filipino participants in their early 20s had average CRP concentrations of 0.2 milligrams per liter — five to seven times lower than average CRP levels for Americans.

"Contrary to assumptions related to earlier studies, our research suggests that ultra-clean, ultra-hygienic environments early in life may contribute to higher levels of inflammation as an adult, which in turn increases risks for a wide range of diseases," said McDade. "In the U.S we have this idea that we need to protect infants and children from microbes and pathogens at all possible costs. But we may be depriving developing immune networks of important environmental input needed to guide their function throughout childhood and into adulthood."

The study will be published online on Dec. 9 in the journal Proceedings of the Royal Society B: Biological Sciences.