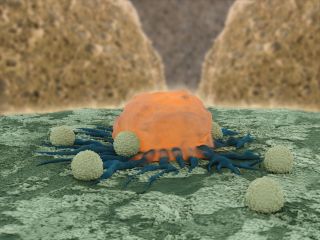 The human immune system is our protector — its job is to defend the body against diseases and other damaging foreign bodies.

The system works by first identifying alien bacteria, viruses, fungi and parasites lurking in the body, and then sends in its troops — white blood cells — to destroy the invaders and the tissues they infect.

Here are 11 surprising facts about the immune system.

Some people have little to no immune system

The 1976 film, "The Boy in the Plastic Bubble," depicts a person with a deficient immune system, who must live out his life in a completely sterile environment because his body is unable to fight infections. Though the story is fictional, the immune system disease — severe combined immunodeficiency (SCID), or "bubble boy disease" — is very real, occurring in about 1 in every 100,000 births.

Bone marrow transplants from a matching sibling donor used to be the only treatment available for patients with SCID, but gene therapy has also recently proved promising.

The germ theory of disease, which correctly states that microorganisms cause some diseases, gained prominence in the 19th century. Before germ theory, humorism (or humoralism) dominated Western medical thinking for some 2,000 years.

The discredited theory proposed that the human body is composed of four liquid substances, or humors: blood, yellow bile, black bile and phlegm. A surplus or deficiency in one or more of these humors causes diseases and disabilities. Disease treatments — such as bloodletting — focused on attempting to restore fluid balance.

The earliest known reference to immunity goes back over two millennia

The first vaccine was developed in the late 18th century, but people recognized the importance of immunity long before that.

During the plague of Athens in 430 B.C., the Greeks realized that people who had previously survived smallpox didn't contract the disease a second time. In fact, these survivors were often called upon to attend to those afflicted with smallpox, according to a 1998 article in the International Journal of Infectious Diseases.

In the 10th century, Chinese healers began blowing dried smallpox scabs into the noses of healthy patients, who then contracted a mild form of the disease — and the patients who recovered became immune to smallpox. This practice, which was called variolation or inoculation, spread to Europe and the New England in the 1700s.

You often hear that bacteria, viruses and fungi are the cause of disease symptoms, but this is technically incorrect. Disease symptoms sometimes occur because your immune system is reacting to the microorganisms.

For example, take the common cold. Your immune system jumps into action when the rhinovirus invades the epithelial cells — cells that line the cavities in the body — in your upper respiratory tract. Immune system chemicals called histamines dilate your blood vessels and increase their permeability, allowing proteins and white blood cells to reach the infected epithelial tissues. However, the inflammation of the blood vessels in your nasal cavity causes nasal congestion.

Additionally, you may get a runny nose because of the increased fluid leakage from your permeable capillaries, combined with an increased mucus production triggered by the histamines.

Your immune system may suffer from lack of sleep

A healthy immune system is vital to warding off colds, influenza and other ailments. But research over the past few decades consistently shows that sleep deprivation depresses the immune system's disease-fighting abilities, such as by decreasing the proliferation of cells called T-cells. Even a single night of poor sleep can impair the immune system by reducing the number of natural killer cells.

What's more, a 2012 study in the journal SLEEP suggested that vaccines may even be less effective for people who sleep less than six hours a night, compared with people who get a full night's rest, possibly because the loss of sleep leads to a dampened immune system response.

Dairymaids helped spark the development of the first vaccine

In the 1700s, variolation had become standard practice in Western society. The technique did still sometimes kill people, but the fatality rate associated with variolation was 10 times lower than that associated with full-blown smallpox, according to a 2005 article in the journal Baylor University Medical Center Proceedings.

As the century wore on, tales had started to spread that dairymaids couldn't get smallpox if they previously suffered from cowpox. Moreover, the fatality rate of cowpox was lower than that of variolation.

So in May 1796, Jenner pioneered the smallpox vaccine. He found a young dairymaid with fresh cowpox lesions on her hands and arms, took pus from the lesions and inoculated an 8-year-old boy. The child developed mild symptoms, including fever and loss of appetite, but he quickly recovered. A few months later, Jenner injected the boy with goo from a fresh smallpox lesion — the child developed no symptoms.

An autoimmune disease is a disorder where the body's natural defenses become hyperactive, attacking normal tissues as if they were foreign bodies. Examples of autoimmune diseases include rheumatoid arthritis, celiac disease and psoriasis.

But the disorders don't affect men and women equally, according to a 2008 article in the American Journal of Pathology. Approximately 5 to 8 percent of the U.S. population has an autoimmune disease — about 78 percent of these people are women.

Gut bacteria are the key to a healthy immune system

The human body is home to trillions of bacteria, which outnumber our own cells 10 to 1. In the gastrointestinal tract, these microbes are often beneficial, helping with digestion and synthesizing vitamins B and K. But research has also shown that our gut bacteria help our immune system and keep us healthy in various ways.

For example, the beneficial bacteria prevent pathogenic (disease-causing) bacteria from taking root in our epithelial and mucosal tissues. And these commensal bacteria also train the immune system to better distinguish between disease-causing pathogens and harmless antigens, which may help prevent the development of allergies.

Similarly, the "good" bacteria may influence the immune system's sensitivity to antigens, potentially helping to prevent autoimmune diseases, conditions in which the immune system attacks the body's own tissues.

The bacteria also produce useful antibodies and trigger the expression of intestinal proteins, which cause the immune system to repair internal injuries.

Sunlight has complex effects on the immune system

For decades, scientists have known that exposure to sunlight — specifically ultraviolet (UV) radiation — can suppress the immune system's response to bacterial, viral and fungal infections. To suppress the human immune system, it takes UVR doses that are only 30 to 50 percent of what's required to cause barely-detectable sunburn, according to a 2010 article in the Journal of Investigative Dermatology.

At the same time, however, sunlight causes the body to produce vitamin D. A recent study in Nature Immunology suggested that T-cells don't mobilize if they detect only small amounts of vitamin D in the bloodstream. Additionally, other research suggests vitamin D might induce the production of anti-microbial peptides in the skin — these compounds help defend the body against new infections.

The immune system is constantly at work to protect you from diseases and fight infections you already have, so you might expect that the system's soldiers — the white blood cells — would make up a large portion of your blood.

But this is not the case. White blood cells account for only 1 percent of the cells in the 5 liters of blood in an adult's body.