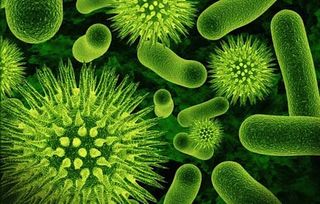 Moms, don't worry too much about getting those surfaces sanitary: New research suggests early exposure to bacteria is critically important to children to keep autoimmune diseases at bay, throughout life.

The research was done in mice, but it supports the "hygiene hypothesis": the idea that bacteria are needed to shape a healthy immune system, and that our bacteria-fearing lifestyles are increasing levels of asthma, allergy and other autoimmune diseases.

"It's really a huge leap to go from mice to humans, but they are both mammals and there are definitely parallels in their immune systems," study researcher Dennis Lee Kasper, a senior physician at Brigham and Women's Hospital in Boston, told LiveScience.

Our immune systems are our line of defense against the germs that surround us.. These germs can be nasty — causing food poisoning, colds and a variety of other diseases — but most are innocuous, and new research is even indicating that some are healthy.

The problem: The drivers of immunity, our white blood cells, can sometimes turn against us. They are programmed to seek out "foreign" proteins — coming from cells that aren't a part of our bodies. But sometimes they recognize parts of our own cells as foreign and start mounting an attack against our bodies, called an autoimmune disease. Allergy, asthma and many other "modern" illnesses — ones that have become increasingly common in modern times — are autoimmune in nature.

"These studies will show the critical importance that microbes play in conditioning the immune system very, very early in life. Earlier than we probably thought before," Kasper said.

"And it also suggests that there may be ways that you can modulate the immune system [in children] and protect against these diseases later in life." [Germs Really Are Everywhere (Infographic)]

In the study, which was published today (March 22) in the journal Science, the researchers compared normal mice with mice that were raised in special germ-free environments. They found high levels of special white blood cells called invariant natural killer T cells (iNKT) in the lungs and intestines of the germ-free mice.

These iNKT cells release proteins that cause inflammation and attract more inflammatory white blood cells. Inflammation plays an important role in many autoimmune diseases, and iNKT cells are known to be an active ingredient in asthma, which is in the lungs, and ulcerative colitis, an inflammatory disease of the bowel.

Between the mice, the most striking differences were in their susceptibility to autoimmune diseases," Kasper said. "The germ-free mice were much more susceptible to the diseases than the germ-exposed mice."

Even when exposed to normal bacteria later in life, the germ-free mice still had abnormally high levels of iNKT cells and diseased lungs and intestines. This indicated that an "immune priming event" happens very early in life and is essential for the proper formation of the immune system, the researchers said.

Axel Kornerup Hansen, a professor at the University of Copenhagen in Denmark who wasn't involved in the study, told LiveScience: "It is becoming generally more accepted that early-life colonization is important for protection against certain inflammatory diseases. INKT cells may very likely be an important part of the story — and probably not only for those diseases mentioned here, but also for Type 1 diabetes."

Pass it on: Sharing your system with certain microbes may prevent autoimmune diseases like asthma and irritable bowel disease.