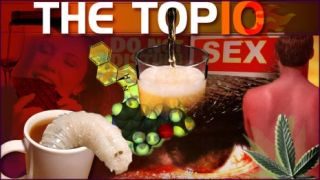 Top 10 Bad Things That Are Good For You

Beer quells heart disease and chocolate staves off cancer? Though often tagged with a disclaimer, studies that tell us to eat, inhale and generally indulge in "bad stuff" is music to our ears. So go ahead and enjoy these bad-for-you remedies-everything in moderation, as they say-until the next study inevitably overturns the research.

Scientists have found that the benefits of sex go beyond immediate, ahem, gratification and satisfying the goal of procreation. Besides the obvious evolutionary purposes, we can all take pleasure in the news that having sex is an easy way to reduce stress, lower cholesterol and improve circulation throughout the body. As if you needed another excuse.

Chocolate lovers rejoice: study after study lately has touted the magical benefits of the indulgent treat, which is packed with the antioxidant flavonols that prevent certain cancers and keep your arteries from clogging. The most recent news? These powerful chemicals may even increase blood flow to the brain, warding off dementia. Just stick to the highest cocoa content possible-the bars packed with sugar don't help your health one bit.

A crucial ingredient in the diets of the world's heart-healthiest populations-like those Bordeaux-guzzling French-red wine has long been known to have potent anti-cancer and artery-protecting benefits. The key, some studies indicate, is an antioxidant found specifically in the skin of red wine grapes, called resveratrol. The latest studies even link resveratrol to greater endurance, a reduction in gum disease and Alzheimer's. White wine, which is fermented after the skins are removed, is less beneficial according to some studies.

It's medicinal, we swear! Marijuana, often associated with memory loss, is ironically now being hyped as a way to stave off the ultimate form of memory loss: Alzheimer's. Recent studies on mice suggest that anti-inflammatories found in the drug prevent the clumping of brain proteins, one major cause of the disease. So when should you start preventative therapy? We suggest waiting for the human studies to wrap up.

They're creepy, slimy and altogether ooky, but maggots can save your life. These squirmy larvae are science's newest wonder-cure and were approved in 2003 as the Food & Drug Administration's only live medical device. Placed on serious wounds, maggots mimic their "wild" lifestyle and munch on bacteria and dead tissue, stimulating healing and helping to prevent infection.

Exposure to the sun's rays is necessary to survive, but can also kill youin gross, cancerous quantities. Asthmatics, at least, could benefit from measured doses of ultraviolet rays, according to scientists. Sunlight suppressed the immune reactions that cause asthma in some lab studies with mice and could be used to treat humans afflicted with the disease in the future. And sunlight-even if indirect, such as on a shaded porch-is known to boost the mood. Extra sunlight can help office workers avoid afternoon drowsiness, a recent study found. There's still no excuse to head outside and bake, however.

We're definitely not in the business of advocating drug use. But check out this interesting science: In heavy drinkers, small doses of LSD have been thought to help bypass the rock-bottom stage of alcoholism and prevent relapses. These studies-some decades old-were done in closely monitored, clinical settings; many patients haven't had a drink in the many years since. It's an interesting finding that needs a lot more investigation, and not a remedy that should ever be tried at home. Meantime, and this may come as no surprise, recent study of 36 volunteers who took an LSD-like drug in a lab setting had them reporting mystical experiences and behavior changes that lasted for weeks.

Java is one of the most debated substances around. Is it good for you? Is it bad for you? Both? The consensus, now anyways, seems to favor those who enjoy their morning jolt — unrelated studies claim coffee is a major source of antioxidants in our diet and can help lower your risk of diabetes. Something in the beans is also thought to ease the onset of cirrhosis of the liver and pancreatitis, good news for those who like to party hard all night before their morning caffeine boost.

If you're one of those people who tends to bottle things up, only to explode ... don't hold it in so long. Studies show that bursts of anger here and there are good for the health, and can be an even more effective coping mechanism than becoming afraid, irritated or disgusted. Anger, like the consumables in this list, however, is best in moderation: stay angry for long periods of time and you'll be plagued with a host of health issues, like blood pressure, sleep disorders and lung damage.

The newest bad kid on the block, beer has long been overshadowed by its healthier alcoholic cousins. While no one's suggesting you switch that glass of antioxidant-rich Pinot Noir for a tall glass of lager-there's still that beer gut to worry about-new research has suggested that moderate beer intake can actually improve cardiovascular function. Now if only a scientist will discover the health benefits of ballpark franks and chicken wings. Heaven.