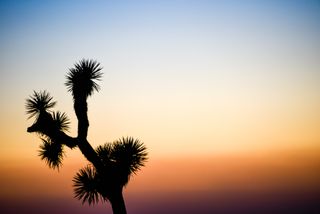 California’s Joshua Tree National Park could lose 80% of its iconic trees by 2070 due to drought and wildfire — and, according to a new study, that’s just the "best case scenario."
(Image: © Shutterstock)

Joshua trees — some of the most unusual and iconic plants of the American Southwest — have survived as a species for some 2.5 million years in the inhospitable Mojave Desert. Now, they may face imminent extinction due to climate change.

In a new study published June 3 in the journal Ecosphere, researchers and volunteer scientists surveyed nearly 4,000 trees in southern California's Joshua Tree National Park to figure out where the oldest trees tended to thrive during historic periods of extreme heat and drought. (A single Joshua tree can live up to 300 years.) Then, the researchers estimated how much of these Joshua safe zones (or "refugia") would survive to the end of the century based on a range of climate change predictions. [Desert Green: Images of Joshua Tree National Park]

The study authors found that, if greenhouse gas emissions are seriously curbed and summer temperatures are limited to an increase of 5.4 degrees Fahrenheit (3 degrees Celsius), about 19% of the park's Joshua tree habitat would survive after the year 2070.

If no action is taken to reduce carbon emissions and summer temperatures rise by 9 F (5 C) or more, however, only 0.02% of the tree's habitat would survive to the end of the century — leaving the rare tree a hair away from extinction.

"The fate of these unusual, amazing trees is in all of our hands," lead study author Lynn Sweet, a plant ecologist at the University of California, Riverside said in a statement. "Their numbers will decline, but how much depends on us."

Survivors in the sand

Joshua Tree National Park covers 1,200 square miles (3,200 square kilometers) of sandy, hilly terrain in the desert between Los Angeles, Las Vegas and Arizona. The spiny-armed Joshua trees have survived millions of years of climate ups and downs by holding on to large amounts of water to carry them through the region's harshest droughts.

However, the study authors wrote, young Joshua trees and seedlings aren't able to store enough water to weather these dry spells. During long droughts — such as the epic, 376-week-long one that lasted from December 2011 to March 2019 in California — various parts of the park became too parched to support young Joshua tree growth, preventing the species from reproducing properly.

As global temperatures rise, more and longer droughts are expected to occur around the world, and that means fewer and fewer new Joshua trees surviving to adulthood. To find out which parts of the tree's desert habitat were safest and which were most at risk of drying up, a team of park researchers and volunteers counted thousands of trees in various parts of the park, noting each tree’s height (which helped predict the tree's age) and the number of new sprouts in the area. They found that, in general, trees growing in higher-elevation spots, which tend to be cooler and retain more moisture, survived much better than those in lower, drier regions.

The team compared these survey results with historic climate records to predict how much of the Joshua tree's habitat was likely to shrink as temperatures rise and rainfall decreases over the rest of the century. Under the best-case scenario, they found, just 1 in 5 Joshua trees will survive the next 50 years.

Taking swift action to reduce greenhouse gas emissions is the only way to save the Joshua trees from extinction, the researchers found. However, even trees in the best-hydrated habitats will still face a serious threat from wildfires, which have also been occurring with greater frequency and intensity as the climate warms, they said. According to the researchers, fewer than 10% of Joshua trees survive when wildfires rush through their habitats — thanks, in part, to car exhaust coating desert shrubs with flammable nitrogen. This, at least, is a threat that can be addressed on a local level, right now.

"Fires are just as much a threat to the trees as climate change, and removing grasses is a way park rangers are helping to protect the area today," Sweet said. "By protecting the trees, they're protecting a host of other native insects and animals that depend on them as well."