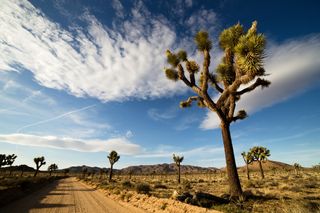 Joshua Tree National Park was damaged during the recent government shutdown. Exactly how long will it take to repair that damage? Nobody knows just yet.
(Image: © Shutterstock)

While the U.S. government was partially shut down for 35 days, the country's national parks suffered damage that could last generations. Now, as volunteers and conservationists assess the environmental and economic damage around the country, it seems that Joshua Tree National Park — a wonderland of spiky trees and surreal, time-sculpted rocks in Southern California — has experienced some of the worst damage.

"What's happened to our park in the last 34 days is irreparable for the next 200 to 300 years," Curt Sauer, a former superintendent of the park, said at a rally on Saturday (Jan. 26).

However, that estimate might be a bit overstated, according to one expert Live Science spoke to. While it's true that the survival of the park's Joshua trees has downstream impacts on the desert birds, insects, mammals and reptiles that rely on them for shelter and sustenance, the loss of a few individual trees is unlikely to have long-lasting effects on the park's 800,000-acre (324,000 hectares) ecosystem, Cameron Barrows, an associate research ecologist at the University of California Riverside's Center for Conservation Biology, told Live Science in an email.

Reduced to a handful of essential staff during the shutdown, the park was unable to perform basic maintenance functions like emptying the trash or making sure the toilets didn't overflow with human waste. Meanwhile, only eight law-enforcement rangers were tasked with protecting the entire park's 1,238-square- mile-grounds (3,207 square kilometers) grounds — an expanse of land about the size of Delaware, Live Science previously reported.

During that time the security lapse, park gates were toppled and locks smashed. Rocks were defaced with graffiti, illegal campfires and vehicle traffic destroyed vegetation at some of the park's most iconic sites, and at least three of the park's ancient Joshua trees were chopped down in order to make way for illegal off-road paths. According to the National Park Service website, the average joshua tree in the park is age of the park's iconic trees is estimated to be about 150 years old.

But that doesn't necessarily mean damage to the park will take centuries to repair, Barrows said.

"Certainly, replacing one destroyed Joshua tree to the same age and condition could take [centuries]," Barrows said. "But I would be hard pressed to say the park is at greater risk of ecological damage by the loss of one tree. If it was, say, 100 acres or greater, then we are probably at a scale where ecosystem integrity is compromised." (Barrows noted that he has not been back to the park since the shutdown to see the full scale of the damage.)

More harmful to the ecosystem may be the many miles of fresh tire marks pummeled into the park's soil by off-road vehicles. That desert soil isn't just dirt or sand — it's also a complex community of vegetation and microbes that can help support every plant and animal that interacts with it.

"Vehicles creating improvised roads are a significant issue," Marinna Wagner, Masters in Landscape Architecture, told Live Science in an email. "Not only does such activity destroy existing vegetation, but the resultant soil compaction reduces soil moisture, increases runoff, causes erosion and sedimentation, and prevents seedling germination, thus slowing down the rate of ecosystem recovery even further."

National Park Service spokesperson Mike Litterst told Vice.com that soil damage like this can last for decades. So far, crews have helped repair about 20 miles (32 km) of tire tracks left during the shutdown, Vice reported, with many more to go.

These and other repairs may stress the park financially as it reckons with considerable financial losses from the shutdown. According to Sauer, the park relied on more than $300,000 in entrance fees to stay open during the shutdown, dipping into money that was meant to be used on park maintenance and the construction of a new visitors' center. In total, Sauer estimated that Joshua Tree lost about $800,000 in revenue during the shutdown.

Editor’s Note: This story was updated to add comment from Marinna Wagner.