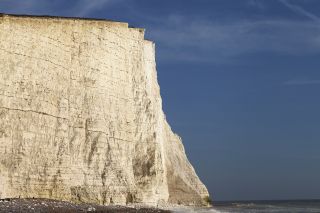 Global sea levels are rising at an alarming rate, posing a serious threat to human and animal populations around the world. Scientists attribute a big chunk of this rise to melting ice at the world's poles, which lose several hundred billion tons of ice each year due to rising global temperatures. But on Wednesday (May 16), Alabama Rep. Mo Brooks proposed an alternative hypothesis: Perhaps the White Cliffs of Dover are to blame?

"What about erosion?" Brooks asked in a meeting of the U.S. House of Representatives Committee on Science, Space and Technology. "Every time you have that soil or rock or whatever it is that is deposited into the seas, that forces the sea levels to rise, because now you have less space in those oceans, because the bottom is moving up." [6 Times Politicians Got the Science Wrong]

The committee convened on Wednesday to determine, as panel member Rep. Bill Posey put it, "the exact amount" of global climate change and "who caused what." In attendance was also scientist Philip Duffy, president of the Woods Hole Research Center in Massachusetts and former senior adviser to the U.S. Global Change Research Program, who fielded questions from Republican and Democratic lawmakers.

In response to Brooks' assertion that tumbling rocks are chiefly responsible for the roughly 3.3 millimeters (0.1 inches) of sea level rise observed every year, Duffy said, "I'm pretty sure that on human timescales, those are minuscule effects."

To be fair, Brooks was at least describing a real scientific phenomenon known as Archimedes' principle. Legend has it that thousands of years ago, when the Greek mathematician Archimedes sat down in his bathtub, he noticed the water rose higher and higher as he submerged his body further and further into the bath. Archimedes determined that the amount of water displaced was exactly equal to the volume of the object displacing it (in this case, his naked Greek body).

Brooks, meanwhile, seemed to be suggesting that something similar is happening in the world's oceans — that rocks and soil are eroding from coastlines into the sea with such frequency that they are displacing hundreds of trillions of gallons of water per year.

How large would the volume of these rocks have to be to explain sea level rise? Washington Post reporter Philip Bump did the math. With an estimated sea level rise of 3.3 mm per year spread across an estimated surface area of 362 million square kilometers (140 million square miles) of ocean, that's a total volume of about 1.2 trillion cubic meters (42.3 trillion cubic feet) of water. To displace that much water, you'd need to drop that same volume of rocks into the ocean.

That amount of matter is equivalent to "a sphere of earth a bit over 8 miles [12.8 km] in diameter," Bump wrote. "If the sphere were stone, it would weigh about 6.6 quadrillion lbs. [3 quadrillion kilograms]."

Drop that much stone into the ocean once a year — every year — and, yes, you could see the annual sea level rise scientists have reported.

So, are Earth's coastlines losing 6 and a half quadrillion lbs. of stuff to the sea every year? That's highly unlikely. To put it in terms of one of Brooks' own examples, the Cliffs of Dover dumped an estimated 100 million lbs (45 million kilograms) of chalk into the sea after a sudden collapse last year, the BBC reported. That's a lot of chalk — but avalanches like that would have to happen 66 million times every year (or 180,000 times a day) in order to raise the entire sea level by 3.3 mm.

Brooks wasn't wrong for suggesting a link between erosion and sea level rise, though. Numerous studies have observed a connection between the two forces, just not the in the way Brooks proposed: Rising sea levels are definitely resulting in more and more coastal erosion, the literature says — not the other way around.