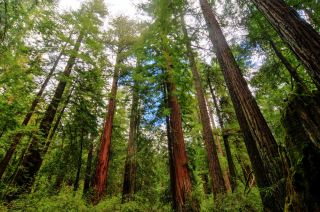 Giant sequoias and California redwoods (also called coast redwoods) are nature's skyscrapers. These enormous trees exist primarily in Northern California, Oregon and Washington and though they have a number of common characteristics, including distinctive cinnamon-red bark, they are different species.

Giant sequoias can grow to be about 30 feet (9 meters) in diameter and more than 250 feet (76 m) tall. The biggest of these behemoths is General Sherman, a giant sequoia in Sequoia National Park. General Sherman stands 275 feet (84 m) tall, has a 102-foot (31 m) circumference, and weighs an incredible 2.7 million lbs. (1.2 million kilograms).

Giant sequoias can live to 3,000 years, with the oldest on record living more than 3,500 years. When they die, it is often indirectly because of root rot or another weakening of the base. Fire, root rot and dry spells do not typically affect the whole tree but if they destabilize the base, gravity can eventually take the tree down, according to Scientific American. This process takes a long time, as evidenced by the fact that sequoias are some of the longest living organisms on the planet.

Mature sequoias lack branches on the lower half of their trunks. Sequoia trunks taper as they rise, forming a rounded top where individual branches sweep downward. Their green leaves are small, scale-like, and arranged in spirals. Both male and females cones are carried on the same tree.

Sequoias grow naturally along the western slope of the Sierra Nevada mountain range, between 5,000 and 7,000 feet (1,524 and 2,134 m) above sea level and far inland. That elevation provides the trees with dry mountain air necessary for their cones to open and release seeds. The snowpack from the Sierra Nevada provides sequoias with the thousands of gallons of water every day. Sequoias have shallow roots and require well-drained soil.

Because of its brittle texture, the sequoia is not a valuable lumber species. It was, nevertheless, logged extensively around the turn of the 20th century. Originally, sequoias could be found throughout the Northern Hemisphere. Today, they are found only in 77 scattered groves in Northern California. Among the places that preserve giant sequoias are Sequoia National Forest, Sequoia National Park, and Giant Sequoia National Monument.

Droughts in California have scientists worried about sequoia health. The drought of the 2010s left many sequoias stressed from lack of water, according to Scientific American. Though sequoias usually die under their own weight, recently scientists have seen some die still standing, and others exhibiting symptoms of dehydration, including brown foliage at the top of the tree. One scientist told PBS in 2015, "The trees are definitely as stressed as we've ever seen giant sequoia."

Not all giant sequoia are suffering from the drought, however. Deborah Zierten, education and interpretation manager with the Save the Redwoods League told LiveScience that a giant sequoia's response to drought is dependent on location. "There are some parks where they have seen a decline in recent years and others where the growth seems to be the same." The differences could be attributed to fire suppression, weather, location and amount of snowmelt exposure, and density of the trees. "There could be competition in some areas," Zierten said.

Fire suppression is another threat to giant sequoias. "Giant sequoias are very dependent on fire," said Zierten. Fire helps release the seeds from their cones, recycle nutrients in the soil, reduce competition from other trees, remove undergrowth and expose bare soil in which new seedlings can take root and open holes in the forest canopy, which let in sunlight for young seedlings.

"There's been a lot of fire suppression over the last 100 or so years," said Zierten. "Some of the parks are trying to reintroduce fire to clear out that understory and stimulate growth."

Researchers are working to understand how climate change is and will continue to affect giant sequoias. Lack of precipitation from snowmelt will probably be the biggest threat, said Zierten. Increased wildfires could also impact sequoias.

These tallest of trees reach heights of more than 350 feet (107 m). The tallest tree in the world is named Hyperion, which reaches 379.7 feet (115.7 m). Redwoods can achieve a diameter of 24 feet (7 m), and 1.6 million lbs. (725,700 kg). These giants can live to be 2,000 years old and have graced the planet for more than 240 million years. Though they once thrived throughout much of the Northern Hemisphere, today redwoods are only found on the coast from central California through southern Oregon. They do not live more than 50 miles inland, and are usually found in long belts, rather than small groves.

True to their name, coast redwoods need a moderate, coastal climate to survive. They require the area's frequent fog to protect them from dry spells and drought. Like sequoias, redwoods require abundant water to drink and have shallow root systems. Redwoods, however, get their water from rain rather than snowmelt, and therefore require consistent rainfall throughout the year. They even "create" their own rain by trapping fog in their lofty branches. With the right amount of moisture, redwoods can grow two or three feet in a year, making them one of the fastest-growing conifers in the world.

In contrast to their size, redwoods have extremely small cones — about one inch long. They have appropriately large root systems, however, often extending 100 feet (30 meters) and intertwining with the roots of other redwoods, according to the California Department of Parks and Recreation. Baby redwoods often sprout at their parents' base, latching onto their roots for nutrients. For this reason, they often grow in circular clusters sometimes called fairy rings.

The coast redwood's lumber has been highly valued historically. It is durable, resistant to rot and termites, non-warping, and relatively soft. For this reason, it has been extensively logged. Since logging began in the 1850s, 95 percent of old-growth coast redwoods have been cut down, according to the Sempervirens Fund. Today, many redwoods exist in protected forests and parks.

The changing climate presents problems for redwoods. A warmer climate may result in less rain, and perhaps more concerning, less fog, which has historically been the tree's defense against dry spells, according to an ongoing study by a group of University of California-based researchers. Fog in northern California and Oregon is on the decline because of climate change and the expanding human population along the coasts, which produce "urban heat islands," according to a UC Merced researcher with the study.

On the other hand, a long-term study conducted by the Save the Redwoods League found that coastal redwoods have seen unprecedented growth over the last 100 years. They are still trying to understand why but one theory involves lessening fog in those areas. "We can't necessarily attribute the spike in growth to any one particular thing, but we know there has been a decrease in fog in the last 100 years," said Zierten. "This means sunnier days, and on sunnier days they are able to photosynthesize a lot. That could be a possibility."

Many studies suggest that redwoods and sequoias may also play an important part in mitigating climate change, according to Zierten. The trees have the ability to pull in and store dangerous carbon, keeping it from wreaking havoc on the climate. "Ancient redwood forests store at least three times more carbon above ground than any other forests on Earth," according to a Redwoods and Climate Change Initiative study.

Zierten emphasized that these studies have focused on ancient, or old-growth, forests. The trees there are bigger so they are able to store more carbon. "Because they are such long-lived trees, they are able to keep that carbon in their wood for a very, very long time," she said. "But it's really about the forest, not the individual trees. Even the fallen logs store carbon, as do the under-story plants."

Restoration efforts depend on the species and location, but some common techniques include "prescribed burning, clearing out understory, thinning, cutting down smaller trees to give big trees more room to grow and invasive plant removal," said Zierten. The Save the Redwoods League also restores creeks and removes some of the many roads that were built during logging booms and cause erosion.

Furthermore, the iconic status of California redwoods may help maintain public interest in saving these climate-helping trees. Zierten encourages West-Coasters and visitors alike to explore redwoods and sequoias in places beyond Muir Woods and Sequoia National Park. "There are 93 parks that conserve redwood and sequoias," she said.