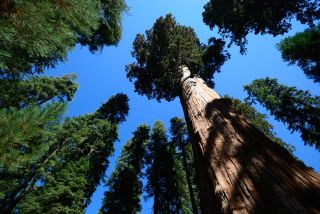 The tallest trees in the world are redwoods (Sequoia sempervirens), which tower above the ground in California. These trees can easily reach heights of 300 feet (91 meters).

Shortly after it was measured and deemed the world's tallest, a writer for the New Yorker climbed close to the top and described what it was like to stand there.

"A wind had begun to blow, and the top of Hyperion swayed back and forth," wrote Richard Preston. "The branches here were spindly, and were encrusted with many kinds of lichen."

A typical redwood lives for 500 to 700 years, although some have been documented at more than 2,000 years old.

The National Park Service says the redwoods' great height is due, in part, to the favorable climatic conditions found in California, including mild year-round temperatures and heavy annual rainfall.