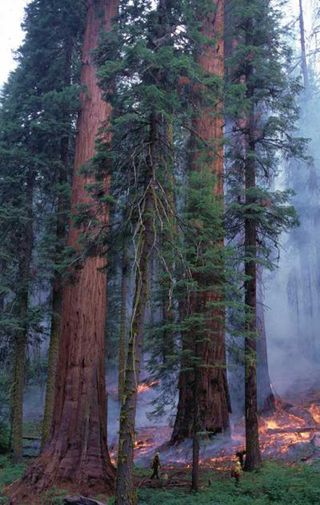 A prescribed burn was conducted in July 2001 in the Giant Forest of Sequoia National Park. The giant redwoods endured frequent fires from the yeas 800 to 1300. Human activity reduced fires in recent decades but now scientists have reintroduced fire to the ecosystem.
(Image: © Tony C. Caprio)

Ancient trees pack a record of ancient events. And now scientists have used 52 of the world's oldest trees — giant sequoia redwoods in California's western Sierra Nevada — to show that the region was plagued by drought and fire from the year 800 through the year 1300.

Scientists reconstructed a 3,000-year history of fire by dating fire scars on the inland sequoias (Sequoiadendron giganteum) in the Giant Forest of Sequoia National Park. Individual giant sequoias can live more than 3,000 years.

"It's the longest tree-ring fire history in the world, and it's from this amazing place with these amazing trees." said Thomas W. Swetnam, lead author of the new study from the University of Arizona in Tucson. "This is an epic collection of tree rings."

Other research has found that the period from 800 to 1300 was warm and dry. The new study showed that the years from 800 to 1300, known as the Medieval Warm Period, had the most frequent fires in the 3,000 years studied.

"What's not so well known about the Medieval Warm Period is how warm it was in the western U.S.," Swetnam said. "This is one line of evidence that it was very fiery on the western slopes of the Sierra Nevada – and there's a very strong relationship between drought and fire."

Droughts are typically both warm and dry, he pointed out.

Knowing how giant sequoia trees responded to a 500-year warm spell in the past is important because scientists predict that climate change will probably subject the trees to such a warm, dry environment again, Swetnam said.

A separate recent study found that less California coastal fog in recent years could stress the redwoods that grow there.

During the Medieval Warm Period, extensive fires burned through parts of the Giant Forest at intervals of about 3 to 10 years, Swetnam said. Any individual tree was probably in a fire about every 10 to 15 years.

The health of the giant sequoia forests seems to require those frequent, low-intensity fires, Swetnam said. He added that as the climate warms, carefully reintroducing low-intensity fires at frequencies similar to those of the Medieval Warm Period may be crucial for the survival of those magnificent forests, such as those in Sequoia and Kings Canyon National Parks.

Since 1860, human activity has greatly reduced the extent of fires, however. In recent years, the National Park Service has reintroduced fire into the giant sequoia groves, a move Swetnam and his colleagues commended.