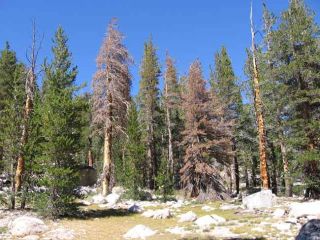 Increasing death rates have been occurring mostly in small trees in the Sierra Nevada, but some larger trees have also died over the past two decades, such as the lodgepole pines in this photo. Credit N. Stephenson, USGS

Yosemite National Park has lost many of its large trees during the last century, possibly due to a warmer climate, a new study finds.

Scientists analyzed data from the earliest records of large tree density in the park from 1932 to 1936, and compared them to the most recent records from 1988 to 1999. They found that the number of large-diameter trees — defined as those with diameters more than about 36 inches (92 cm) — in the park declined by 24 percent over that period.

"Although this study did not investigate the causes of decline, climate change is a likely contributor to these events and should be taken into consideration," said USGS scientist emeritus Jan van Wagtendonk, lead author of a paper describing the results in the latest issue of the journal Forest Ecology and Management.

Large trees are usually older than smaller trees, and serve a variety of useful roles in a forest, including as habitats for many plants and animals, and as a source of seeds for the environment around them. In addition, large trees can often better withstand fires, insect outbreaks and other environmental effects compared to smaller trees.

"Even though large-diameter trees constitute a small proportion of the trees in the forest, they disproportionately influence forest communities for centuries," the researchers wrote in the journal paper.

Large trees are particularly important as habitats for spotted owls, mosses, orchids and fishers (a carnivore related to weasels), some of which are already endangered. Many species also rely on them for large logs and branches used in nests.

The scientists also detected a change in which tree species were most common. In some forests that had not experienced fires for a long time, the researchers measured a shift toward fire-intolerant trees such as white fir and incense cedar. They found lower numbers of fire-tolerant trees such as ponderosa pines.

This trend is somewhat worrisome because forest fires could become more common as the climate warms.

"We should be aware that more frequent and severe wildfires are possible in Yosemite because of the recent shift to fire-intolerant trees in unburned areas and warmer climates bring drier conditions," van Wagtendonk said.