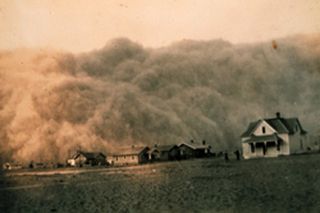 Drought has beset the Earth since before farming began. In developing nations, it brings suffering and death. In wealthier countries like the United States, it brings economic devastation when crops wither and die, and forests burn.

The United States continues to feel the aftereffects of the 2012 drought , the most severe and extensive in nearly half a century, during the hottest year on record. It affected about 80 percent of the nation's farmland, making it more widespread than any drought since the 1950s, according to the U.S. Department of Agriculture (USDA).

The drought destroyed or damaged portions of major field crops in the Midwest — particularly, field corn and soybeans — causing hikes in farm prices and leading to other shortages in animal feed, including hay and grasses. Those price spikes, in turn, are prompting increases in the retail prices of beef, pork, poultry and dairy products.

More importantly, the threat posed by drought could become even greater as the planet heats up, especially in parts of the United States — and the world — that already are dry.

"Droughts are a normal part of the climate cycle that we should expect and plan for, but there will be more stress under increased temperatures,'' said Mark Svoboda, a climatologist with the National Drought Mitigation Center at the University of Nebraska-Lincoln. "The roller-coaster ride will just get rockier. Climate change will put some more double loops into that roller-coaster ride.''

Drought typically afflicts a third of the nation's counties each year, according to the USDA. In recent history, the United States has experienced a number of persistent droughts, including the notoriously famous Dust Bowl of the 1930s. The Southern Plains and the Southwest endured a serious drought in the 1950s, as did the entire West from 1998 until summer 2004. A merciless drought began in Texas in October 2010, continued throughout 2011 and still affects parts of the state.

To be sure, the 2012 drought was due, in part, to natural climate variability — in this case, the La Niña event that began in fall 2010. La Niña conditions change weather patterns over the Pacific Ocean and North America, steering storms north of where they usually occur, depriving the already-arid Southwest of much-needed rainfall. But the unrelenting hot temperatures made things worse.

"This drought wasn't unusually long, but it was unusually hot,'' said Jonathan Overpeck, co-director of the Institute of the Environment at the University of Arizona. "That's what makes this a global-warming-style drought. It has much bigger impacts because it is a hot drought.''

The natural cycle of La Niña is occurring against a background of a climate that is warming. This pattern "always increases moisture in the atmosphere, which takes moisture out of the soil," said Richard Seager, research professor at Columbia University's Lamont-Doherty Earth Observatory in New York. "When you have these endless El Niños and La Niñas against this background, droughts will tend to get worse.''

Michael Mann, professor and director of the Earth System Science Center at Pennsylvania State University, agrees. "What produces drought isn't just the absence of rainfall,'' he said. "Warmer soils evaporate moisture into the atmosphere more rapidly. Even in regions that get more rainfall in the summer, drought actually worsens because any increase in rainfall is offset by these evaporative losses.''

Globally, more intense and longer droughts have occurred over wider areas since the 1970s, particularly in the tropics and subtropics. "Increased drying due to higher temperatures and decreased precipitation have contributed to these changes, with the latter the dominant factor,'' said Kevin Trenberth, distinguished senior scientist in the climate-analysis section at the National Center for Atmospheric Research (NCAR).

A hot mega-drought in the future "will affect water resources dramatically, and we probably would have a major shortage on the Colorado River and the Rio Grande, and other rivers upon which we depend for water supplies,'' he added. "We will also see devastating impacts in our landscapes.''

Last year in the Southwest, the drought killed trees and desert plants, and spawned unprecedented wildfires, all "related to a drought that wasn't as bad compared to what we could get," Overpeck said, adding, "I worry that we could get one of these really long precipitation-deficit droughts, coupled with the warming temperatures. That would be a devastating climate emergency.''

However, changes in soil conservation and land-use practices — as well as crop and livestock management that minimize soil erosion — could prevent the damaging dust storms that characterized the 1930s Dust Bowl years. But the prospect of such a drought remains a disturbing possibility.

Michael Wehner, a staff scientist at Lawrence Berkeley National Laboratory, conducted a study that used the Palmer Drought Severity Index to project future drought conditions in the United States. The Palmer index is one of several tools used to measure drought.

The findings indicated that "normal conditions in the United States by the end of the century would be the same as the 1930s Dust Bowl,'' Wehner said. "The risk of a Dust Bowl has increased, and will continue to increase, quite a bit over the course of the 21st century.''