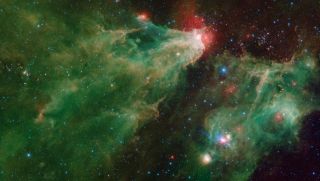 The universe is full of "runaway stars" trying to escape their home galaxy (including the reddish-blue dot in the bottom-right corner of this NASA telescope image). A new study suggests that some of these stellar renegades may in fact be rare supernova survivors.
(Image: © NASA/JPL-Caltech)

There's a rebellious, half-dead star in the Little Dipper that's hellbent on escaping our galaxy — and now, astronomers have an idea why.

The star, a small white dwarf that's moving incredibly fast toward the edge of the galaxy, may be one of just a handful of known white dwarfs that exploded in supernovas and lived to tell the tale, according to a study published June 21 in the journal Monthly Notices of the Royal Academic Astronomical Society.

The study authors said this unusual star, named LP 40−365, is a "partly burnt runaway remnant," suggesting that a peculiar, weaker-than-average supernova rendered the star much smaller, faster and toastier than a typical white dwarf. Strange as it appears, this stellar oddity may not be alone; using data from the European Space Agency's Gaia space telescope, the study authors also found three additional stars in other parts of the galaxy with properties and trajectories similar to LP 40-365's.

The researchers said these four oddball stars may represent a newfound type of fate for white dwarfs that run out of fuel and explode — a fate that leaves them charred, shrunken and streaking across the galaxy at incredible velocities, but still largely intact. These partly burnt dwarfs "form a distinct class of chemically peculiar runaway stars," the study authors wrote, and the objects could shed their own weird form of light on the complex factors that cause stars to explode in the first place.

When a large star exhausts all of its nuclear fuel, it may shed its outer layers of matter and shrink into a hot, shriveled husk called a white dwarf. Eventually, as gravity continues compacting that dying star core, the star may collapse, explode in a supernova, and leave behind an ultradense neutron star or black hole.

The authors of the new study said stars like LP 40−365 represent a third possible fate for exploded dwarfs. To meet this fate, the white dwarf must explode in a peculiar, theoretical sort of explosion called a type Iax supernova. Essentially, previous studies have argued, these are smaller-than-average supernovas capable of ripping away some of a white dwarf's matter while leaving its core largely intact.

In addition to blowing away a bunch of the afflicted star's mass, a type Iax supernova may kick that star out of its orbit — possibly sending the star flying so fast that it is no longer bound by the gravitational pull of its home galaxy. Stars like LP 40−365 will almost assuredly escape into intergalactic space in time, the authors wrote, and satellite images already show this happening. (Take a look at these two images of LP 40−365, taken in 1955 and 1995, to see how its escape is already warping the shape of the Little Dipper.)

It's not unusual for a renegade star to get punted across the universe after, say, its binary partner explodes or gets sucked into a black hole. But it's quite another matter for an old star to collapse into a white dwarf, explode in a supernova and then keep on smoldering as an even-smaller white dwarf. Besides their impressive speed (they move at hundreds of miles per second), partly burnt remnants are also unusual for their size; they are much smaller than a typical white dwarf, having lost much of their mass in the supernova. They also retain clear traces of past supernovae in their atmospheres, which are rich in ash and heavy elements but lacking in light elements like hydrogen and helium, which may have burnt away.

The researchers said they are optimistic that, by looking for these telltale features, the Gaia satellite could detect as many as 20 additional partly burnt stellar remnants before the instrument's mission ends in 2022. That could provide enough evidence to prove that some stars have what it takes to survive a supernova explosion, even if the experience leaves them eager to find a new galactic home.