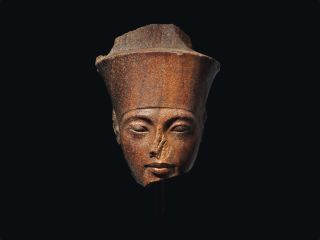 This life-size ancient sculpture depicting the head of King Tut sold for nearly $6 million at Christie's in London on July 4.
(Image: © Christie's)

Despite a sketchy provenance, a raging diplomatic dispute and threat of court action, a sculpture depicting the head of the pharaoh Tutankhamun sold for $5,971,285 (4,746,250 pounds) yesterday (July 4) at auction at Christie's in London.

Both the buyer and seller are anonymous. "The buyer chose to remain anonymous on this occasion," a spokesperson for Christie's told Live Science.

"This is a black day in the history of archaeology," said Zahi Hawass, Egypt's former minister of antiquities, noting that Christie's has no evidence that the sculpture — made of quartzite, a type of stone — left Egypt legally. Egypt's antiquities ministry believes that the King Tut statue was looted from Karnak Temple sometime after 1970. [In Photos: The Life and Death of King Tut]

Christie's denies this, saying that the sculpture was owned by Prinz (Prince) Wilhelm von Thurn und Taxis (1919-2004) in the 1960s and early 1970s. A Live Science investigation raised doubts about this, as Wilhelm's son and niece denied that he ever owned it; documents uncovered by Live Science also suggested Wilhelm never owned the statue.

Egypt's embassy to the U.K. has already lodged an objection about the sale; Egypt will also likely both go to court and lodge an official complaint with UNESCO about the sale, in an attempt to get the sculpture repatriated to Egypt, Hawass said. That Christie's proceeded with the sale shows that the auction house lacks ethics, Hawass said.

Christie's released a statement saying: "We recognize that historic objects can raise complex discussions about the past; yet our role today is to work to continue to provide a transparent, legitimate marketplace upholding the highest standards for the transfer of objects."

Hawass noted that Christie's sold the sculpture to a rich person who will likely put it in a corner of their house, whereas if the sculpture had been returned to Egypt it would be displayed for the entire world to see, he said.