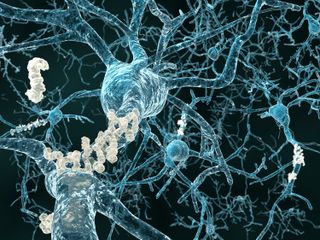 Alzheimer's disease is an incurable brain disorder that causes plaques to grow around nerve cells, destroying them.
(Image: © Shutterstock)

Alzheimer's disease is a progressive brain disorder that causes problems with memory, thinking and behavior in older adults. The disorder affects an estimated 5.7 million Americans, and is the fifth-leading cause of death in people ages 65 and older, according to the Centers for Disease Control and Prevention (CDC).

Alzheimer's disease is often used as a synonym for dementia, which is a devastating loss of memory and cognitive function in older people, said Dr. Brad Hyman, a neurologist and director of the Massachusetts Disease Research Center at Massachusetts General Hospital in Boston. Dementia is an umbrella term for impaired memory thinking skills, and Alzheimer's is a specific form of dementia. Alzheimer's disease is responsible for 50-70% of all dementia cases, according to Alzheimers.net.

The first case of Alzheimer's was described in 1906 by Dr. Alois Alzheimer, a German neurologist. Alzheimer identified two of the disease's key physical traits when he examined a woman's brain tissue under a microscope after her death: He found abnormal protein clumps (now known as amyloid plaques) and tangled bundles of nerve fibers (now called neurofibrillary, or tau, tangles). [6 Big Mysteries of Alzheimer's Disease]

An explosion of research over the last five years has shed more light on what goes wrong in the brain during Alzheimer's, Hyman told Live Science. Four things are seen in the brain tissue of a person who has died of the disease: The two traits that Dr. Alzheimer noted, plus nerve cell loss and inflammation, he said.

Researchers also suspect that inflammation (excessive action of immune cells in the brain) plays an important role in the progression of Alzheimer's and is more than a side-effect of the disease, Hyman said.

The brain changes associated with Alzheimer's may begin a decade or more before a person begins experiencing symptoms, Hyman said.

The most common early symptom of Alzheimer's is difficulty remembering newly learned information, such as recent conversations, events or people's names, according to the Alzheimer's Association. But not everyone has memory problems initially, and some people may first develop changes in their behavior, language difficulties or vision problems.

According to the Mayo Clinic, symptoms in people with mild-to-moderate forms of Alzheimer's may include:

People with advanced-stage Alzheimer's experience a severe loss of brain function and become completely dependent on others for their care. According to the National Institutes of Health, symptoms during this stage may include:

The cause of Alzheimer's disease is unclear, but researchers suspect the disease is triggered by a combination of genetic, lifestyle and environmental factors that affect the brain over time.

Getting older is the biggest risk factor for developing Alzheimer's. Early-onset Alzheimer's affects people under age 60, and some forms may be inherited. But early-onset disease represents less than 10% of all people with the disorder, according to the National Institute on Aging. Late-onset Alzheimer's is the more common form of the disease, and its first symptoms may appear after age 65.

Besides age, other risk factors for Alzheimer's disease, according to the Mayo Clinic, include:

While there is no single test to diagnose Alzheimer's, doctors may examine a patient for signs of stroke, tumors, thyroid disorders or vitamin deficiencies as these factors also affect memory and cognition, Hyman said.

Doctors will also perform a physical exam to assess the patient's balance, muscle strength and coordination, and conduct neuropsychological tests of memory, language and basic math skills. Along with reviewing the patient's medical history, the doctor may also survey family or friends about the patient's behavior and personality changes.

In the past few years, positron emission tomography (PET) scans of the brain, which can detect whether plaques or tangles are present, have been used to diagnose or monitor the disease, especially in research, Hyman said. Another exciting breakthrough is the use of cerebrospinal fluid from a spinal tap to measure abnormal protein concentrations in the brain, which indicates the presence of Alzheimer's, he said.

There isn't a cure for Alzheimer's, but there are medications available that treat some of the symptoms of the disease, Hyman said.

Cholinesterase inhibitors are drugs that may help with symptoms such as agitation or depression. These drugs include donepezil (Aricept), galantamine (Razadyne) and rivastigmine (Exelon).

Another medication known as memantine (Namenda) may be used to slow the progression of symptoms in people with moderate to severe Alzheimer's. Some patients may be prescribed antidepressants to control behavioral symptoms.

Experts agree that in addition to medication, lifestyle factors, such as staying physically, mentally and socially active can all help the brain. A diet rich in fruits, vegetables and whole grains, with moderate amounts of fish, poultry and dairy can also be beneficial.

Alzheimer's research has expanded significantly in the past decade, Hyman said. Dozens of clinical trials are aimed at finding treatments to slow the disease progression or prevent it altogether, he said.

Previous clinical trials focused on preventing the increase in plaques in the brain, but those experimental therapies failed to produce dramatic results, Hyman said. That outcome suggests that the treatment was administered too late in the disease progression.

Instead of focusing on plaques, recent drug trials have focused on three other goals for new therapies, Hyman explained. One is to explore whether there are ways to make the brain's remaining nerve cells work better and more efficiently. The second is looking at ways to get rid of the tangles in the brain, and the third is investigating whether decreasing inflammation can prevent harmful brain changes, Hyman said.