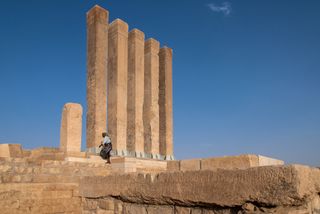 Yemen has a rich history with numerous archaeological remains dating back many millennia. Museums and some archaeological sites have been looted during the ongoing civil war. A Live Science investigation recently revealed the trade in Yemen's artifacts.
(Image: © Shutterstock)

At least 100 artifacts from Yemen have been successfully sold at auction for an estimated $1 million in the U.S., Europe and the United Arab Emirates since 2011, according to a Live Science investigation into the country's so-called "blood antiquities."

The artifacts include ancient inscriptions, statues, coins and manuscripts from the Middle Ages, Live Science found after analyzing auction records.

Live Science also obtained shipping information showing that since 2015, when conflict in Yemen escalated into a civil war, there has been a surge in shipments of artifacts, antiques and art sent from Saudi Arabia (a country that borders Yemen and is involved in the conflict) to the United States. Between January 2015 and December 2018, about $5,940,786 worth of these potentially smuggled items were sent from Saudi Arabia to the United States. That's compared with just $3,703,416 of such items that were sent to the U.S. during a 19-year period between January 1996 and December 2014.

It's unclear how many of the artifacts, art and antiques sent from Saudi Arabia to the U.S. were looted or stolen from Yemen.

Protests in 2011 through 2012 forced Yemen's longtime president Ali Abdullah Saleh to resign. Attempts to form a stable national government failed, and in 2015 the country fell into all-out civil war involving numerous factions, including the terrorist groups al-Qaeda in the Arabian Peninsula and ISIL (also known as ISIS or Daesh). Thousands of people have died and millions are in danger of starvation, the United Nations has found. Airstrikes and artillery have destroyed or damaged numerous structures, including historical buildings. [In Photos: The Destruction of Iraq Heritage Sites by ISIS]

Recently, the Antiquities Coalition, a nongovernmental organization that opposes the sale of looted artifacts and the Republic of Yemen (which controls territory in the north, east and south of Yemen) put out a list of 1,631 objects that were stolen from several museums in Yemen.

"We call on the art market and general public to help recover Yemen's missing treasures. These are 'blood antiquities' in every sense of the name. However, they are also the rightful property of the Yemeni people, which they hope to pass down to future generations," Deborah Lehr, chairman of the Antiquities Coalition, said in a statement.

Live Science could not confirm if any of the artifacts sold at auction since 2011 are on that list.

A team of researchers with the ATHAR Project has been monitoring 95 Facebook groups whose members include looters, antiquities sellers and buyers. They recently completed an in-depth study of four of the groups that are based in Syria, finding 56 posts saying they had artifacts to sell from Yemen and 450 such posts offering Syrian artifacts, said Katie Paul, an archaeologist who runs the project along with Amr al-Azm, who is a history professor at Shawnee State University in Ohio. [Photos: Destruction at Syria's Temple of Ain Dara]

"And we still have 91 groups we are working on recording," Paul said.

"The items being offered out of Yemen are significant. Carved stone, bronze statues, even historic items and weapons," said Paul, adding that "in some cases, one of the more prominent traffickers we have followed has even posted photos of his find spot for artifacts."

Additionally, Live Science has been following a Facebook group that often has posts by people who claim to use spirits called the "jinn" to find artifacts. While many of the group members are from Jordan and Palestine, a few are from Yemen.

Satellite imagery suggests that looting of archaeological sites in Yemen is not as rampant as it is in Syria, Iraq and Egypt. A high-resolution satellite image of Shabwa, an ancient city in Yemen, was obtained from Maxar Technologies and shown to Michael Fradley, an archaeologist and researcher with the Endangered Archaeology in the Middle East and North Africa Project (EAMENA), which is based at the University of Oxford in the United Kingdom. [Photos: Damage to Syrian Ruins Seen from Space]

Fradley found that a large area had been dug up, possibly with a bulldozer, north of Shabwa's ancient city wall, sometime between 2010 and 2015. "It is not entirely clear why this area has been damaged in this way, but it seems most probable that stone or other material was being dug for building," Fradley said.

Based on telltale pockmarks that indicate looting in satellite imagery, Fradley said that pillaging of archaeological sites in Yemen hasn't increased dramatically since 2015, during the escalation of conflict. "This is in sharp contrast to the steep rise in visible looting pits that have been recorded from satellite images in countries such as Syria and Iraq during recent conflict periods, and countries with widespread looting issues such as Egypt," Fradley told Live Science.

There are some exceptions. For instance, the site of al-Sawda, where the ancient city of Nashan was located, experienced an increase in looting in 2013 that slowed down in 2016, Fradley said. "The looting focuses on an area southwest of the ancient city, presumably an extramural cemetery where tombs may contain grave goods," Fradley said.

A man named Mohammad Mabrouk Ayyach who lives near al-Sawda told Mwatana, a nongovernmental organization that monitors the war in Yemen, that al-Sawda "represents the history and civilization of our old generations and represents a great source of pride for us."

"In the past, citizens would dig in the site to get gold or beads because of poverty and unemployment in the region," said Ayyach, noting that the site has recently become a war zone that is not safe to enter. The reporter used information obtained from the United States International Trade Commission.