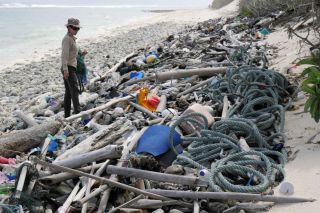 That's the takeaway from a survey of plastic pollution on the beaches of Australia's Cocos Islands, made up of two coral atolls.

An estimated 414 million pieces of debris are now littering the remote islands, and the vast majority of that waste is buried below the surface, according to a new study. But even that is likely an underestimate, a group of researchers reported May 16 in the journal Scientific Reports.

What's more, because most of this plastic is buried below the surface, and most global surveys don't look below the surface, the amount of plastic pollution worldwide may be way more than we previously thought, they reported. [In Images: The Great Pacific Garbage Patch]

The scientists surveyed seven of the 27 islands, which made up 88 percent of the total landmass of the islands, and estimated that they were littered with 262 tons (238 metric tons) of plastic. A quarter of those pieces of debris were single-use or disposable items such as straws, bags and toothbrushes (about 373,000 of them), The researchers also identified some 977,000 shoes.

Roughly 93% of the debris found, most of it tiny micro-debris, was actually buried below the surface. But because they only dug 3.94 inches (10 centimeters) into the sand, and couldn't access some beaches that are known to have a lot of debris, these numbers are likely conservative, lead author Jennifer Lavers, a research scientist at the University of Tasmania, said in a statement.

"Plastic pollution is now ubiquitous in our oceans, and remote islands are an ideal place to get an objective view of the volume of plastic debris now circling the globe," Lavers said. Back in 2017, the same group of researchers revealed that the Henderson Island, a remote, uninhabited island in the South Pacific, was also the world's most polluted one.

Plastic production has increased dramatically over the last decade — in the last 13 years alone, we've manufactured nearly half of all the plastic produced in the last six decades A recent global estimate finds that 5.25 trillion items of plastic are now in the ocean, which is more than the number of stars in the Milky Way, according to the paper.

The amount of debris buried up to about 4 inches (10 cm) below the surface of the beach is 26 times higher than the amount visible on its surface, the researchers wrote. "This suggests global debris surveys, the majority of which are focused solely on surface debris, have drastically underestimated the scale of debris accumulation."