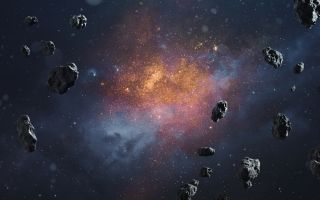 While heads of state bicker over protecting Earth's most vulnerable places from the ravages of industry, a new study suggests that maybe it's not too early to start protecting other worlds from human exploitation, too.

The study, published April 16 in the journal Acta Astronautica, makes a case for designating 85% of our solar system a protected "wilderness" akin to Earth's national parks, leaving just one-eighth of eligible planets, moons and asteroids free to be mined or developed by human interests.

If the growth of a space economy is anything like the exponential growth of terrestrial economies since the Industrial Revolution began roughly two centuries ago, the study authors wrote, then humans could deplete the solar system of all of its water, iron and other mineable resources in a matter of centuries — potentially leaving the solar system a dried-up wasteland in as little as 500 years.

"On a timescale of less than a millennium we could have super-exploitation of the entire solar system out to its most distant edges," the authors wrote. "Then, we are done."

Limiting the exploitation of resources on other worlds now, before the space economy kicks off in earnest, is crucial to avoiding what the researchers call a "crisis of potentially catastrophic proportions."

An eighth of space

Limiting galactic consumption to one-eighth of the available resources might sound like a bad deal on its face, but space is a big place, and even a small fraction of our solar system's bounty could set humanity up for generations.

"One-eighth of the iron in the asteroid belt is more than a million times greater than all of the Earth's currently estimated iron ore reserves," the authors wrote, "and it may well suffice for centuries."

To come up with this "one-eighth principle," the researchers looked at estimated iron use on Earth since the start of the Industrial Revolution. According to one 1994 survey of the revolution's environmental impacts, the global production of crude iron rose from around half a million tons (450,000 metric tons)in 1800 to half a billion tons (453 million metric tons) of steel produced in 1994 — a thousand-fold increase in consumption.

This rate is equivalent to the world's iron production doubling once every 20 years, the authors wrote. Newer data from the U.S. Geological Survey (USGS) supports this estimate, showing that the world's iron production increased from 1 billion tons (900 million metric tons) in 1994 to 2.2 billion tons (2 billion metric tons) in 2016, just 22 years later.

If Earthlings show a comparable level of industriousness when mining the resources on nearby planets, moons and asteroids, we'd reach the hypothetical one-eighth point after 400 years, the authors calculated. If production continued to double every 20 years after that, all of the solar system's resources would be depleted just 60 years later. That would give humans 60 years to transition from a space-resource-based economy to something completely different — an unhopeful prospect, given the lackluster response to current environmental crises like population growth and climate change, the researchers wrote.

So, how do Earthlings go about measuring an eighth of the solar system's exploitable resources? We can start by ruling out massive, gravity-intense worlds like Jupiter, where human industry will likely never take hold, and instead focus on nearby prospects like the moon, Mars and iron-rich bodies tumbling through the asteroid belt. Assessing how many tons of potentially extractable resources are awaiting us on those worlds will require a lot more space exploration, ideally in the next 40 years (One-tenth of the time until the earliest point of total resource exhaustion). That, too, seems an unlikely prospect.

"Worldwide, the present rate of planetary mission launches is 15 per decade," the authors wrote. "At this rate, even just the nearly 200 worlds of the solar system that gravity has made spherical would take 130 years to visit once."

Various space agencies and private companies are in the process of figuring out how to mine trillions of tons of iron from nearby asteroids, as well as water from the moon.