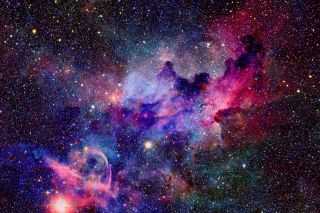 For thousands of years, humans have watched the stars and wondered how the universe came to be. But it wasn't until the years of World War I that researchers developed the first observational instruments and theoretical tools to transform those big questions into a precise field of study: cosmology.

"I think of cosmology as one of the oldest subjects of human interest but as one of the newest sciences," said Paul Steinhardt, a cosmologist at Princeton University who studies whether time has a beginning.

Cosmology, in a nutshell, studies the cosmos as one entity, rather than analyzing separately the stars, black holes and galaxies that fill it. This field asks big questions: Where did the universe come from? Why does it have stars, galaxies and galaxy clusters? What's going to happen next? "Cosmology is attempting to make a very large-scale picture of the nature of the universe," said Glennys Farrar, a particle physicist at New York University.

Because this discipline grapples with many phenomena, from particles in the vacuum to the fabric of space and time, cosmology draws heavily on many fields, including astronomy, astrophysics and, increasingly, particle physics.

The interdisciplinary nature of the field helps explain its comparatively late start. Our modern picture of the universe started to come together only in the 1920s, shortly after Albert Einstein developed the theory of general relativity, a mathematical framework that describes gravity as a consequence of the bending of space and time.

"Before you understand the nature of gravity, you can't really make a theory of why things are the way they are," Steinhardt said. Other forces have greater effects on particles, but gravity is the major player in the arena of planets, stars and galaxies. Isaac Newton's description of gravity often works in that realm too, but it treats space (and time) as a rigid and unchanging backdrop against which to measure events. Einstein's work showed that space itself could expand and contract, shifting the universe from stage to actor and bringing it into the fray as a dynamic object to study.

In the mid-1920s, astronomer Edwin Hubble made observations from the recently built 100-inch (254 centimeters) Hooker telescope at the Mount Wilson Observatory in California. He was attempting to settle a debate about the location of certain clouds in space that astronomers could see. Hubble proved that these "nebulae" weren't small, local clouds but instead were vast, distant star clusters similar to our own Milky Way — "island universes" in the parlance of the time. Today, we call them galaxies and know that they number in the trillions.

The biggest upheavals in cosmic perspective were yet to come. Hubble's work in the late 1920s suggested that galaxies in every direction are speeding away from us, triggering decades of further debate. Eventual measurements of the cosmic microwave background (CMB) — light left over from the universe's early years and since stretched into microwaves — in the 1960s proved that reality matched one of the possibilities suggested by general relativity: Starting out small and hot, the universe has been getting bigger and colder ever since. The concept became known as the Big Bang theory, and it rattled cosmologists because it implied that even the universe could have a beginning and an end.

But at least those astronomers could see the galaxies' motion in their telescopes. One of cosmology's most seismic shifts, said Farrar, is the idea that the vast majority of the stuff out there is made of something else, something completely invisible. The material we can see amounts to little more than a cosmic rounding error — only about 5% of everything in the universe.

The first denizen of the other 95% of the universe, what's come to be called the "dark sector," reared its head in the 1970s. Back then, astronomer Vera Rubin realized that galaxies were pinwheeling around so fast they ought to spin themselves apart. More than hard-to-see matter, Farrar said, the stuff keeping galaxies together had to be something totally unknown to physicists, something that — except for its gravitational pull — completely ignores ordinary matter and light. Later mapping revealed that the galaxies we see are simply nuclei in the center of colossal "dark matter" spheres. The filaments of visible matter that stretch across the universe hang on a dark frame that outweighs visible particles five to one.

The Hubble Space Telescope then uncovered signs of an unexpected variety of energy — which cosmologists now say accounts for the remaining 70% of the universe after accounting for dark matter (25%) and visible matter (5%) — in the 1990s, when it clocked the expansion of the universe as speeding up like a runaway train. "Dark energy," possibly a type of energy inherent to space itself, is pushing the universe apart faster than gravity can draw the cosmos together. In a trillion years, any astronomers left in the Milky Way will find themselves in a true island universe, enveloped by darkness.

Current cosmology packages these landmark discoveries into its crowning achievement, the Lambda-CDM model. Sometimes called the standard model of cosmology, this bundle of equations describes the universe from about its first second onward. The model assumes a certain amount of dark energy (lambda, for its representation in general relativity) and cold dark matter (CDM) and makes similar guesses about the amount of visible matter, the shape of the universe and other characteristics, all determined by experiments and observations.

Play that baby-universe film forward 13.8 billion years, and cosmologists get a snapshot that "statistically has everything we can measure up to a certain point," Steinhardt said. This model represents the target to beat as cosmologists push their descriptions of the universe deeper into the past and into the future.

As successful as Lambda-CDM has been, it still has plenty of kinks that need working out. Cosmologists get conflicting results when they try to study the universe's current expansion, depending on whether they measure it directly in nearby galaxies or infer it from the CMB. This model doesn't say anything about the makeup of dark matter or energy, either.

Then there's that troublesome first second of existence, when the universe presumably went from infinitesimal speck to relativistically well-behaved bubble. "Inflation" is a popular theory that tries to handle this period, explaining how a brief moment of even quicker expansion blew up minuscule primordial variations into the large-scale unevenness of today's galaxies, as well as how the Lambda-CDM inputs got their values.

No one knows how inflation worked in detail, however, or why it stopped where it presumably did. Steinhardt said that inflation should have continued in many regions of space, implying that our universe is just one slice of a "multiverse" containing every possible physical reality — an untestable idea that many experimentalists find disquieting.

To make progress on questions like these, cosmologists look to precision measurements from space-based telescopes like the Hubble Space Telescope and the upcoming James Webb Space Telescope, as well as experiments in the emerging field of gravitational wave astronomy, such as the National Science Foundation's Laser Interferometer Gravitational-Wave Observatory. Cosmologists also join particle physicists and astrophysicists in an interdisciplinary race to detect particles of dark matter.

Just as cosmology couldn't begin until other branches of physics had matured, it won't be able to finish revealing the history of the universe until other areas are more complete."To get the story straight, you have to work out essentially all the laws of physics at all energy scales and at all conditions," Steinhardt said. "And a change in any one of those could radically change the cosmological story."

Farrar said she doesn't know if that will happen but marvels that people have grasped the complexities of the universe as much as they have. "It's amazing that the human brain has evolved to the point that these questions can apparently be answered," she said. "Some of them at least."