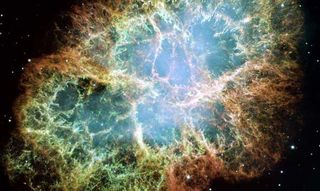 The Big Bang is science's best explanation for how the universe began. According to the theory, the universe started out much hotter and much denser than it is today, and expanded and cooled over time.

Though the term may sound like the universe began with a giant explosion, many scientists say that's not part of the theory. An explosion implies that something exploded, or expanded, from one center point outward into space. In fact, the Big Bang theory suggests that space itself expanded.

"If it were an explosion it would have a center," said physicist Paul Steinhardt, director of the Princeton Center for Theoretical Science at Princeton University in Princeton, N.J. "We actually observe that everything is moving away from everything else. It's really about an expansion of the universe ."

Instead of a center from which everything expanded, scientists think space is expanding everywhere, in all directions, equally.

"Space isn’t just something that sits there and things happen in it – space is a dynamical thing," said Andreas Albrecht, a theoretical physicist at the University of California, Davis.

Though to some, the question of whether there was an explosion is just semantics.

"I think anything that starts out at 10 to the 40th degrees, and is doubling in size every tiny, tiny fraction of a second – I think you'd want to call that an explosion," Albrecht said. "But it has different features than someone setting off a bomb in the desert."

Another confusing aspect of the theory is the idea that at the very moment of the Big Bang, the universe existed in a single point, a singularity of infinite temperature and density. Although this is what the theory says, scientists think that's where the Big Bang theory becomes inadequate. Those infinities are signs that the mathematics have broken down and fail to truly describe the universe.

In order to fully understand what happened then, scientists think we need a better fundamental theory of physics that can incorporate our current description of the very small (general relativity ). As of now, those two theories are irreconcilable, and they collide at the moment of the Big Bang.

Caption: The above photo is not of the Big Bang (there are no photos of it). The Hubble Space Telescope image is of the Crab Nebula. Credit: NASA/ESA and Jeff Hester (Arizona State University)