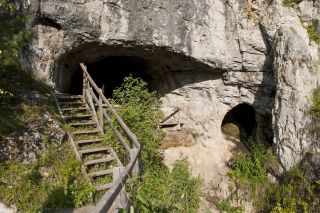 The mysterious Denisovans are known only from fossils unearthed in the Denisova Cave, shown here, in the Altai Mountains in Siberia.
(Image: © Bence Viola, Max Planck Institute for Evolutionary Anthropology)

This lineage's genetic differences from other humans made it as distinct a group as our closest extinct relatives, the Neanderthals and Denisovans, scientists added.

Although modern humans are now the only living branch of the human family tree, others not only lived alongside modern humans, but even interbred with them, leaving behind DNA in the modern human genome. These archaic lineages not only included the Neanderthals, the closest extinct relatives of modern humans, but also the mysterious Denisovans, known only from fossils unearthed in the Denisova Cave in the Altai Mountains in Siberia.

The researchers found that large stretches of DNA from this geographic region were not consistent with a scenario in which modern humans there interbred with just one Denisovan lineage. Instead, they discovered modern Papuans carried hundreds of gene variants from two deeply divergent Denisovan lineages — the one previously recognized in Papuans and South Asians, and the other never identified before.

All in all, "what we thought was a single group — Denisovans — was actually three very different groups, with more diversity among them than that seen today in modern humans," study senior author Murray Cox, a population geneticist at Massey University in New Zealand, told Live Science. [In Photos: Bones from a Denisovan-Neanderthal Hybrid]

Based on the level of genetic differences between all three Denisovan lineages, the researchers suggested the newfound lineage separated from the other two about 363,000 years ago, Cox said. All in all, this new Denisovan lineage "is about as different from the Denisovan individual found in Denisova Cave as it is from Neanderthals," Cox said. "This means that if we're going to call Neanderthals and Denisovans by special names, this new group probably needs a new name too."

The DNA from this newfound lineage was found primarily in modern individuals who "lived on or near New Guinea," Cox said. "We used to think of Denisovans as people who lived in the frozen north — for example, around Denisova Cave in Siberia — but their center of gravity was actually in the south, in the tropics of Southeast Asia and New Guinea."

Their main goal was not to learn more about human evolution, but to benefit modern human health.

"Our research program is primarily focused on improving health care for a region of the world that is radically understudied," Cox said, referring to the tropics. In fact, research on archaic humans has been biased toward Europe and northern Eurasia, partly because DNA collected from ancient bones "can only survive in regions that are cold," Cox said. Until now, "the oldest DNA from the tropics is only about 6,000 years old."

Modern humans have inherited numerous genetic variants from interbreeding with archaic humans that "are influencing the health of people today, mostly positively, sometimes negatively," Cox said. "For instance, many Europeans carry immunity gene variants from Neanderthals and these have been shown to be really important in us fighting off infections today. If we've kept archaic gene variants, it's usually because they're better than the modern human variant. We interbred with archaic hominins and we mostly took all the good bits."

And at least according to the new findings, of the many different archaic human groups in Eurasia "most of them lived down near the tropics," Cox noted. "If you look at modern human diversity, and biological diversity in general — for example, plants and animals — most diversity is in the tropics. This study fits into a much bigger body of scientific findings that show that this was also true for archaic hominins — their center of gravity was in the tropics, too."

The scientists detailed their findings online today (April 11) in the journal Cell.