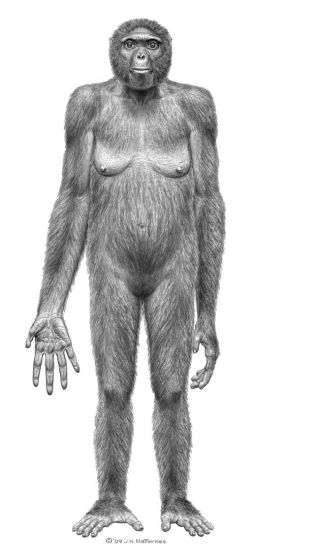 Editor's Note: This is Part 4 in 10-part series LiveScience series on the origin, evolution and future of the human species and the mysteries that remain to be solved.

The dawn of humanity remains a fascinating mystery. What started our distant ancestors on the evolutionary path that led to us?

Spectacular fossils and a host of other data uncovered in the last decade are revealing key details to solving this riddle. As often than not, however, these clues raise as many questions as they answer.

The latest fossil relative of humanity to be unearthed — Ardipithecus ramidus — is among the most extraordinarily detailed. It may also be potentially crucial to our understanding of human evolution.

A remarkably complete female of the species dubbed "Ardi" and at least 35 members of her species were discovered in Ethiopia and are roughly 4.4 million years old. This date is significant, as genetic evidence suggests our branch of the primate family tree — often known as the hominids — appeared roughly 4 million years ago after diverging from the last common ancestor we shared with chimps.

Ardipithecus "is the first creature on our side of the family tree," said paleoanthropologist Tim White of the University of California at Berkeley, a leader of the team that discovered Ardi.

The holy grail of the study of human evolution would be discovering the first hominid, as it would shed light on what first drove our ancestors to develop the way they did. Darwin conjectured tool use was the key, driving us to bipedalism to better use our hands, but fossil evidence shows bipedalism came millions of years before larger brains or stone tools did, and chimpanzees, our closest living relatives, clearly know how to make and use tools while staying as a quadruped, on all fours.

For a long time now, scientists have instead suggested that bipedalism — an upright posture on two legs — was the key adaptation that set us on the line to becoming human, "but I think that is actually much less clear now with Ardi," said paleoanthropologist John Hawks at the University of Wisconsin at Madison.

While Ardi was better at walking upright than chimpanzees are, it still would have been poor at it and must have spent a lot of time in the trees, possessing as she did an opposable big toe and other adaptations of the foot and pelvis best developed for climbing. Indeed, "her generalized pelvis might be the default form, with the long pelvis of chimps and gorillas, adapted for having their trunks in a horizontal position, being derived from that," Hawks said.

What makes Ardipithecus a clear relative of humanity are its small, human-like canine teeth.

Virtually all male primates except hominids have large canines — in chimpanzees and gorillas, these are tusk-like, and when the upper canines close down, they are sharpened against lower teeth, keeping them honed as weapons for threatening and sometimes attacking other males.

This evolutionary change in canines might explain why bipedalism evolved in the first place, suggested anatomist C. Owen Lovejoy at Kent State University, who collaborated with White on Ardi. Since the canines were no longer used as weapons, Lovejoy conjectured this reflected a change in behavior, involving less competition between males. To entice females, males instead might have brought them food, and bipedalism would free up the arms to carry such gifts.

"We see now with Ardi that bipedality is part of a broader change, but I think we have yet to identify what that is — dietary or ecological or even social factors," Hawks said.

Australopithecus — the ancestor of humanity?

While Ardipithecus may represent the first hominid, it may be Australopithecus that may be the ancestors of Homo, the group that we humans, Homo sapiens, belong to. Although Ardi had an intermediate form of walking, the famed 3.2-million-year-old skeleton Lucy, which belonged to the species Australopithecus afarensis, definitely strode upright.

Homo emerged about 2.5 million years ago, coinciding with the first evidence of stone tools. "The environment got drier about then. There was drying throughout Africa, and spreading of grassland species," Hawks said. "Horses enter about 2.3 million years ago, the ancestors of the zebra, and you had grassland antelopes diversifying."

"Everyone wants to find the first," Hawks said.