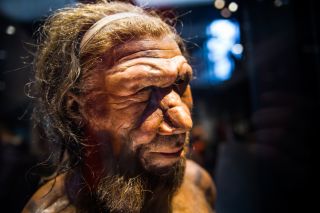 A model of a Neanderthal man, based on 40,000-year-old remains found at Spy in Belgium.
(Image: © Shutterstock)

When geologist William King introduced a new species of human, Homo neanderthalensis, to the European scientific community in 1864, he wasn't very generous toward our extinct evolutionary cousins.

"I feel myself constrained to believe that the thoughts and desires which once dwelt within it never soared beyond those of a brute," King concluded after examining the skull that had been found in the Neander Valley, Germany, a decade earlier.

It was a lousy, and lasting, first impression. Thus, "Neanderthal" became not only a new species, but a pejorative term. However, research has come a long way since then: So how smart were the Neanderthals, based on what we know today? [The 10 Biggest Mysteries of the First Humans]

Anthropologists' early perception of Neanderthals was partly rooted in racist ideology that one's intelligence or humanity could be assessed from skull shape, said João Zilhão, a professor at the Catalan Institution for Research and Advanced Studies (ICREA) at the University of Barcelona. Many of those scientists also shared a view that evolution was all about progress, and that ancestral human species like Neanderthals were necessarily much more "primitive" than humans are today. Those assumptions have been discredited (if not hard to shake from Western science and pop culture). Humbling new discoveries over the past few decades have helped to rehabilitate Neanderthals' reputation as people who were a lot like us.

"The only way to assess their intelligence — whatever that means, but that's a different issue — is by what they did," Zilhão told Live Science. And it turns out that Neanderthals did a lot of things that were once thought to be exclusive to modern human culture.

They worked stones and bones into tools and ornaments much like the kind created by modern humans who were alive at the same time. (Neanderthals lived in Europe and Southwest Asia from about 400,000 to 40,000 years ago.) They invented glue using tar from birch bark to attach wooden handles to stones. They made necklaces from eagle talons. Neanderthals used fire to cook food, and new studies on stone tools suggest they had the technology to spark fires, too. (In other words, they didn't just have to chase embers when lightning struck to fuel their hearths.)

Some evidence suggests Neanderthals also had spiritual and ritual practices. Tombs discovered at sites like La Chapelle-aux-Saints in southwestern France show that these archaic humans buried their dead. At another site in France, researchers discovered that Neanderthals descended deep inside a cave and created enigmatic stone circles out of stalagmites 176,000 years ago.

The extent of Neanderthals' symbolic abilities is still debated; they were alive at the same time as modern humans were creating some of the first abstract and figurative cave art, but few artworks have been attributed to these people. However, in 2018, in a win for the Neanderthals, researchers reported that 65,000-year-old abstract images in Spanish caves must have been created by Neanderthals. (Scientists think that modern humans didn't get to Western Europe until about 42,000 years ago.)

Based on their bones, we know that Neanderthals were capable of at least making complex sounds. It's hard to prove that Neanderthals had language because they didn't leave us any writings (although neither did anatomically modern humans from the same period). But some researchers have argued that they probably did have sophisticated ways of communicating.