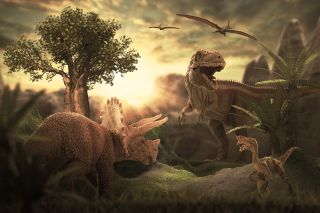 Could evolution ever bring back these extinct creatures?
(Image: © Shutterstock)

Did you watch the 1993 movie blockbuster "Jurassic Park" and wonder, "Could this happen for real? Could the dinosaurs ever come back?" The idea that these mighty creatures could wander our Earth again some day is for most humans both fascinating and terrifying in equal measure.

Even real-life scientists are intrigued as to whether the evolutionary process could bring us back to the time of the Tyrannosaurs. But Susie Maidment, a vertebrate paleontologist at London's Natural History Museum, quickly dismissed the notion that a DNA-filled mosquito preserved in amber for millions of years — as in "Jurassic Park" — could ever help recreate an extinct dinosaur.

"We do have mosquitos and biting flies from the time of the dinosaurs, and they do preserve in amber," Maidment said in a statement. "But when amber preserves things, it tends to preserve the husk, not the soft tissues. So, you don't get blood preserved inside mosquitos in amber." [Is It Possible to Clone a Dinosaur?]

Researchers have found blood vessels and collagen in dinosaur fossils, but these components don't have actual dinosaur DNA in them. Unlike collagen or other robust proteins, DNA is very fragile, and sensitive to the effects of sunlight and water. The oldest DNA in the fossil record is around 1 million years old, and the dinosaurs died out about 66 million years ago.

Maidment added: "Although we have what appears to be blood from mosquitos up to 50 million years old, we haven't found DNA, and in order to reconstruct something, we need DNA."

Jamal Nasir, a geneticist at the University of Northampton in the United Kingdom, said he wouldn't rule out the idea of dinosaurs evolving back from the dead. In his opinion, evolution isn't fixed or planned. In other words, anything could happen. "Evolution is largely stochastic [randomly determined], and evolution doesn't necessarily have to go in a forward direction; it could have multiple directions. I would argue that going back to dinosaurs is more likely to happen in reverse, because the building blocks are already there."

Of course, Nasir pointed out, the right conditions would have to exist for dinosaurs to reappear. "Clearly, one could imagine viral pandemics that might disrupt our genomes, our physiology and behavior beyond our control," he told Live Science. This, in turn, could create the right conditions for evolution to take a path toward reinventing the ancient reptiles.

However, while evolution might not be directional in any particular sense, something we do know is that we don't see the same animal evolving again, Maidment countered. "We can see an animal that is closely related occupying a similar ecological niche — for example, ichthyosaurs were marine reptiles with long pointy snouts and dolphin-like body shapes and tails," she told Live Science. "Today we see the dolphin, and they probably occupy a similar ecological niche. But we wouldn't describe a dolphin as an ichthyosaur because they don't possess the anatomical characteristics that allow them to be ichthyosaurs." [What If a Giant Asteroid Had Not Wiped Out the Dinosaurs?]

Besides, dinosaurs never quite died out in the first place, Maidment said. Birds evolved from meat-eating dinosaurs, and thus in strict biological definition, everything that evolved from this common ancestor is a dinosaur, sharing the same anatomical characteristics, she said.

Some scientists are even dabbling with the evolution process by trying to reverse engineer a chicken into a dinosaur, dubbed the "chickenosaurus." However, this beast, if it ever comes to fruition, would not be a replica of a dinosaur, but rather a modified chicken, Jack Horner, a research associate at the Burke Museum at the University of Washington, previously told Live Science.

Things have changed drastically over 66 million years, and if one day a dinosaur evolved back onto Earth, it would be to a very different world.

"An animal that died out naturally, perhaps 150 million years ago, is not going to recognize anything in this world if you bring it back," Maidment noted "What is it going to eat when grass hadn't [yet] evolved back then? What is its function, where do we put it, does anyone own it?"

That said, it may be best to let sleeping dinosaurs lie, she said.