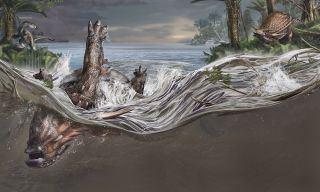 When the nodosaur Borealopelta markmitchelli died 110 million years ago, it was swept out to sea, out of the reach of predators.
(Image: © Bonadonna, Davide/National Geographic Creative)

CALGARY, Alberta — While it's impossible to say how a 112-million-year-old dinosaur died, researchers are turning themselves into sleuths to figure out how this ancient beast transformed into a stunning, 3D fossil that looks like the statue of a sleeping dragon.

Their verdict? It's a mixture of the dinosaur's durability (it had tough, boney armor) and the extraordinary circumstances that not only kept the beast out of the reach of scavengers, but also led to its unique fossilization, said study lead researcher Donald Henderson, curator of dinosaurs at the Royal Tyrrell Museum of Palaeontology in Alberta, Canada.

"It is the best-preserved armored dinosaur in the world," Henderson told Live Science. "The quality of the preservation and the intact configuration make this specimen a Rosetta Stone for the interpretation of armored dinosaurs." [Photos: This Plant-Eating Dinosaur Had Spikes, Armor and Camouflage]

The spiky dinosaur — a nodosaur, an armored relative of the ankylosaur — was discovered at the Suncor Millennium Mine in Alberta in 2011. Researchers were amazed to see that the fossil wasn't flattened by the millions of years of rock and sediment pressing down on it.

Instead, a combination of factors led to the exceptional 3D fossilization of the newly identified species, known as B. markmitchelli, Henderson said.

It's unclear why the 18-foot-long (5.5 meters) animal perished, but soon after its death, B. markmitchelli was swept out into an ancient, inland seaway that stretched from the Gulf of Mexico to the Arctic Ocean. Once there, the dinosaur drifted away from any predators on land, such as carnivorous dinosaurs, and from marine scavengers, such as freshwater crocodilians, Henderson said.

As the body decayed, it filled with gas, causing it to bloat and float far out into the seaway, away from damaging shore waves and any nearshore marine scavengers, such as crabs and bristly, carnivorous marine worms, Henderson noted.

Most dead and bloated animals explode sooner rather than later, but B. markmitchelli's thick and armored skin likely withstood the high pressure from pent-up gas that is released as a dead animal's internal organs decompose. This likely delayed the final rupture of the dinosaur's body wall, the researchers said.

The 3,000-lb. (1,360 kilograms) nodosaur landed on its back on the seabed with a gigantic thump, leaving an impact crater where the remains sank into deep ooze on the seabed.

"This [ooze] sealed the skin with armor and scale away from what little oxygen there was, so decay was minimal," Henderson said. This lack of decay meant the nodosaur's scales, armor and even the pigment molecules in its skin were preserved.

However, B. markmitchelli would have decayed a little, given that the dinosaur was dead. As the remains decomposed, different compounds, such as putrescine (a foul-smelling, organic chemical that forms when amino acids break down) would have altered the seabed's chemistry, encouraging the rapid deposition of minerals around the carcass to produce an exceptionally thick protective sarcophagus, Henderson said.

"The strength of the sarcophagus prevented the specimen from being squashed flat by the weight of a kilometer of rock that must have been above the specimen for most of the past 112 million years," Henderson said. [Photos: See the Armored Dinosaur Named for Zuul from 'Ghostbusters']

Henderson and his colleagues figured out these details by observing the geology of the mine. They also inspected the sarcophagus-like structure and the sediments inside and outside the dinosaur's body, Henderson said.

Moreover, based on the mineralogy of the rocks around the nodosaur, "we can state that the specimen came to rest on the seabed in water that was at least 50 meters [164 feet] deep," Henderson said.

The research, which has yet to be published in a peer-reviewed journal, was presented Friday (Aug. 25) here at the 2017 Society of Vertebrate Paleontology meeting.