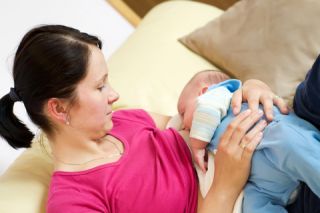 A newborn gulping breast milk may be doing his or her genes good, researchers say.

Breast milk, but not formula, may improve the functioning of a baby's genes in a way that protects the infant from illness, according to a new study published in the May issue of the American Journal of Physiology, Gastrointestinal and Liver Physiology.

Scientists have long reported that breast is best. Breast milk-fed babies have stronger immune systems, fewer allergies and may be more resistant to chronic diseases, such as asthma, digestive disorders, and perhaps diabetes (Types I and II) and obesity.

And we now have our first clues why.

Researchers have shown that an infant's first food affects his or her gene expression, giving a possible mechanism for how breast milk impacts health. (Gene expression is the process by which instructions in a gene are used to synthesize a functional gene product, mostly proteins. When genes are expressed, it is as if they are "turned on.")

"Genes are really sensitive to nutrition," said study researcher Sharon Donovan of the University of Illinois. "And we now have genes that may explain many of the clinical observations of how breast-fed and formula-fed infants differ."

Using a novel noninvasive technique, researchers compared 10 formula-fed 3-month-olds with 12 breast-fed infants of the same age. Capitalizing on the natural sloughing off of intestinal cells during digestion, the researchers looked for signs of gene expression, in the form of messenger RNA, in the babies' poop.

Breast milk and formula have different effects on at least 146 genes, the researchers found.

Most of the genes enhanced by breast milk promote quick development of the intestine and immune system, Donovan told LiveScience.

"At birth, the poor baby comes out of a nice protected environment, where everything is taken care of," Donovan said, into a world teeming with bacteria and where nutrition must be obtained from a rookie intestine. The faster the baby's digestion tract and immune system get up to speed, the healthier the child.

Some of the genes positively affected by breast milk protect against "leaky gut," a disorder in which foreign particles enter the bloodstream through the intestinal wall, Donovan said. Leaky gut is thought to increase the risk of allergies and inflammatory diseases, such as asthma, colitis and Crohn's disease — all of which may have higher rates among formula-fed babies, previous research has suggested.

Breast milk and formula likely affect gene expression in one of two ways, Donovan said. They could change the factors responsible for decoding DNA into its active forms. Or they could have an epigenetic effect, where the DNA spiral is refolded, making certain genes more or less available for use.

The latter (epigenetics) is usually, but not always, permanent and, if this is the mechanism used, it might explain why breast milk can have life-long health benefits.

"Breastmilk evolved to feed human infants, and it contains a number of bioactive elements," Donovan said, such as hormones, growth factors and plentiful fibers.

"Cow's milk (the primary ingredient in formula) evolved to feed calves," Donovan continued. Its composition is much different than human milk, and its bioactive elements are often destroyed during processing, she said.

Of course, manufacturers are continuously trying to tweak formula to make it more like breast milk. "But even though people have been breastfeeding infants for thousands of years," Donovan said, "we [scientists] still have a lot to learn."

The research was funded in part by Mead Johnson, which makes baby formula.