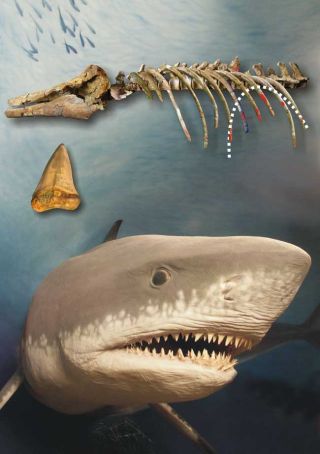 The skeleton of a dolphin, preserved for 4 million years, shows bite marks across its ribs from the shark attack that killed it.
(Image: © Giovanni Bianucci)

A nursery for the extinct giant shark known as the megalodon — the largest shark that ever lived — has been unearthed in the Isthmus of Panama.

This giant carnivore lived roughly between 17 million and 2 million years ago. Based on fossil teeth discovered in the past, which could reach up to 6.6 inches long (16.8 centimeters), the megalodon could stretch more than 52 feet long (16 meters). The fetuses alone could reach 13 feet (4 meters) in length.

Scientists investigating two roughly 10-million-year-old fossil sites in the Isthmus of Panama found troves of megalodon teeth, roughly 400 in total. Other fossils discovered in the area suggest it was covered with shallow, salty waters some 82 feet deep (25 meters) located within a marine strait that once connected the Pacific Ocean with the Caribbean Sea.

Surprisingly, large megalodon teeth were uncommon in the troves. Instead, most ranged between 0.6 and 2.8 inches in length (1.6 to 7.2 cm).

Based on the shapes of the little teeth, the researchers suggest they are from juveniles, as opposed to being small teeth from regular adults or coming from some dwarf species of megalodon. For instance, some teeth possessed tiny sideway-jutting projections previously seen in young megalodons, while others were small, thick and heart-shaped, possibly coming from embryonic sharks.

These findings mark the first definitive evidence that megalodons had nurseries. All in all, the scientists found teeth from 21 juvenile megalodons some 6 to 34 feet long (2 to 10.5 meters), as well as from seven adults, some of which were possibly mother sharks.

"It is amazing how we were able to reconstruct a behavioral strategy used by ancient sharks based on fossils," said researcher Catalina Pimiento, a biologist at the University of Florida and the Smithsonian Tropical Research Institute.

Great white sharks raise young in nurseries as well, typically in shallow areas where they can find ample food and protection from predators, mainly larger sharks. These findings reveal that sharks, "even in their largest forms, have used nursery areas for millions of years as an adaptive strategy for their survival," Pimiento said.

Pimiento and her colleagues detailed their findings online May 10 in the journal PLoS ONE.