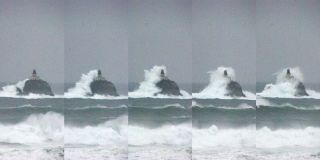 A National Weather Service image shows a wave cresting over the top of Tillamook Rock Lighthouse, which sits off the coast of Oregon and has its light 134 feet (41 meters) above sea level.
(Image: © NWS Portland)

Cyclonic winds, rushing down from Alaska had nothing else to batter against, so they smacked into the water across miles of open ocean. The winds pushed and ground and heaved against the waves, making them bigger, more sustained and more powerful. By the time these waves reached the U.S. shoreline, they were massive, prompting the National Weather Service (NWS) to issue high-surf alerts up and down the West Coast beginning Sunday (Dec. 16) and in many cases remaining in effect until midday today (Dec. 18).

In a tweet from NWS San Francisco, forecasters warned any adventurous Californians, "STAY WELL BACK FROM THE OCEAN OR RISK CERTAIN DEATH."

These winds, wrote Marshall Shepherd, director of the University of Georgia's Atmospheric Sciences program and a weather-science writer for Forbes, resulted from a low-pressure system centered in the Gulf of Alaska. In the Northern Hemisphere, he explained, wind whirls counterclockwise around systems like this. Because of the location of the low pressure system, those winds can build up huge waves across hundreds of miles before ramming them into the West Coast. These wind-driven waves can grow to dozens of feet high, though they don't drive themselves inland like tsunami waves of similar height do. [Hurricanes from Above: See Nature's Biggest Storms]

The worst-affected areas, according to The Washington Post, are around San Francisco, where waves have reached 30 to 40 feet (9 to 12 meters), but the water has been dangerous as far north as places in Washington state and as far south as Los Angeles.

Those dangers, Shepherd wrote, extend to activities beyond actually playing in or surfing these monster waves. Simply going near the water, playing on rocks, jetties or beaches, would put people at risk of being swept into the turbulent sea by an especially large wave, Shepherd wrote. And that cold, rough water, he wrote, can trigger "cardiac arrest and involuntary gasp reflexes that lead to drowning."