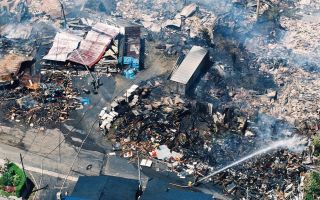 WASHINGTON — Tsunamis, the giant waves generated by earthquakes under the sea, are known for flooding vulnerable coastal areas with vast quantities of water. But a tsunami that struck Japan in 1993 brought a different kind of destruction — it set the harbor on fire.

Following a magnitude-7.8 earthquake in the Sea of Japan on July 12 of that year, a tsunami wave barreled toward Okushiri Island in northern Japan. Suddenly, several boats in the port spontaneously burst into flames, and winds from the tsunami drove the blaze inland, to devastating effect, according to Yuji Enomoto, a professor emeritus at Shinshu University in Japan.

This astonishing phenomenon was documented at the time by video crews with NHK, Japan's biggest broadcasting company, but the footage has long been inaccessible, Enomoto told Live Science. [Waves of Destruction: History's Biggest Tsunamis]

Even so, Enomoto recently gained access to the elusive footage. He used the video — along with laboratory experiments — to interpret what caused the dangerous "tsunami fires," and he presented an explanation of the strange event on Dec. 13 here at the annual meeting of the American Geophysical Union (AGU).

The 1993 Hokkaido earthquake was the strongest to strike Japan in 25 years, producing "scenes of utter devastation, with houses and Buddhist temples splintered in the mud, boats thrown far inland, and roofs of some homes floating out to sea," The New York Times reported on July 14 of that year.

In the aftermath, rescue workers confirmed that 97 people were killed, as many as 190 were injured, and more than 160 people were missing, according to The Times.

Low-lying Okushiri Island bore the brunt of the tsunami. About 10 minutes after the earthquake, the first tsunami wave struck Aonae Harbor on the island's western coast, Enomoto and his colleagues reported. Without warning, five fishing boats spontaneously caught fire almost simultaneously. As the second tsunami wave hurtled toward shore, it generated powerful winds that pushed the burning boats to the coastal area, spreading the fire into the city.

What caused those fires? Methane gases buried in the seafloor and stirred up by the tsunami were likely to blame, according to the researchers.

Witness accounts from the island in the minutes before the fires flared up described mists rising and seawater "foaming," Enomoto explained.

Those bubbles might have been the result of released methane, which can be combustible under certain conditions. While there are no photographs or video that show the ocean bubbling, a similar scene was captured following the 2011 earthquake off the Pacific coast of Tōhoku — a magnitude 9.0 to 9.1 — in video taken by the Japan Ground Self-Defense Force. And a similar fire emerged afterward, the researchers wrote. [Biggest Earthquakes in History]

While NHK captured footage of the 1993 fires, their video also included disturbing scenes of people swept away by the giant waves, and network officials prohibited its broadcast after the tragedy. However, Enomoto was able to view the footage — confirming eyewitness reports of the fires — and received permission from NHK to use several stills for the purpose of his research, he said.

According to Enomoto, the bubbles that people described seeing in 1993 — and which appeared again in 2011 — represented methane that was formerly embedded in the seafloor but was dislodged by the ground sliding; the methane bubbles were squeezed up and out into the air by the tsunami front, which transported them to the shore area.

"Bacterial mats suggesting methane release have been found off the west of Okushiri Island, where the tsunami originated," the researchers reported.

To test whether the released methane could have caused the fires, Enomoto and his colleagues conducted experiments with seawater that held methane, to see if certain conditions could generate an electrostatic charge. They found that when electrostatic energy generated a charge of 0.28 millijoules, the methane would catch fire. If the charged air during a tsunami reached at least that level of electrostatic energy, it would be enough to ignite the methane bubbles, Enomoto explained.

The researchers concluded that methane electrostatically ignited in 1993 when the wind violently drove released methane into Aonae Harbor's quay wall. Methane bubbles that had accumulated on the decks of the fishing boats sparked as well, and the fire spread further when it reached oil or gasoline leaking from a car that had been swept into the harbor.

These so-called tsunami fires are an underestimated and understudied hazard of tsunamis, Enomoto told Live Science. As there are significant quantities of methane buried in coastal regions off Japan, this merits closer attention in order to head off fires that could potentially be triggered by powerful earthquakes, he added.