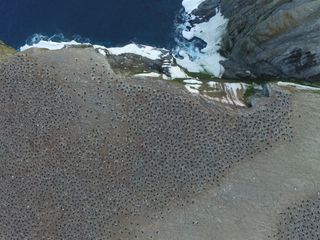 This year, scientists announced an incredible discovery by looking at poop stains in satellite images — 1.5 million Adélie penguins were living and thriving on a little patch in Antarctica surrounded by treacherous sea ice called the Danger Islands.

It turns out that these elusive seabirds had lived on the islands undetected for at least 2,800 years, according to new, unpublished research presented Dec. 11 at the American Geophysical Union meeting in Washington, D.C. [In Photos: Adélie Penguins of East Antarctica]

It all started when a group of researchers spent 10 months doing what they thought was a pan-Antarctic survey of Adélie penguins by looking through every single cloud-free satellite image that they had of the southern continent. "We thought that we knew where all the [Adélie] penguin colonies were," said Heather Lynch, an ecologist at the Stony Brook University, during the news conference.

That is, until a colleague at NASA developed an algorithm that made the detections automated. That's when it "bing bing bing," started flagging all of these pixels from the Danger Islands that "we as human annotators had simply just missed," Lynch said. When Lynch and her team went back to look more closely at the images, sure enough, they saw the extent to which the Danger Islands were filled with penguin poop.

"We, I think, had missed it in part because we hadn't expected to find them there," Lynch said. They had previously surveyed one of the islands of the group, but not all of them.

The Danger Islands are not easy to get to, as they are "so-called because they're almost always covered by a thick layer of sea ice all around that precludes regular censuses in this area," Lynch said.

Even so, spurred by the poop stains, Lynch's colleagues journeyed to the islands for a full survey, where they counted — physically on the ground and with drones — just how populated by this seabird they were. "In this area that's so small that it doesn't even appear on most maps of the Antarctic," live more Adélie penguins than the rest of Antarctica combined, Lynch said. She stayed at Stony Brook University and managed satellite images to help them avoid sea ice.

The news shocked and delighted people across the globe when it came out in March.

After all, the rest of the Adélie penguins on the mainland, their habitat hit hard by climate change, have been steadily declining for the past 40 years. In fact, "nowhere is the climate changing more rapidly than on the Antarctic peninsula," Lynch said.

But some of the team's new findings suggest that although 1.5 million seems like a big number, it's not as large as it once might have been. After their initial analyses of recent satellite imagery, the team decided to look at past satellite images that date back to 1982.

They found that the Adélie penguin populations likely peaked in the late 1990s and "has been on a slow but steady decline ever since," Lynch said. The decline "is not catastrophic," but rather on the order of a 10 to 20 percent decline, she later added.

Because the Danger Islands are almost always surrounded by sea ice, they are more protected from krill fishing and other human interventions than other areas of the continent, Lynch said. But even so, the best working hypothesis is that the population decline there is probably also due to climate change.

Part of the team, led by Casey Youngflesh, a postdoctoral researcher at the University of Connecticut, also spent some time figuring out what the penguins were eating based on the shade of pink of their poop in satellite images — eating krill versus fish can make a difference in poop color. Another part of the team, led by Michael Polito, an assitant professor in the department of oceanography and coastal sciences at Louisiana State University dug holes in the island to learn about the penguins' past. Radiocarbon dating of the bones and eggshells found in these holes revealed these penguins have been hiding out on the islands for a long time: They seem to have first appeared on the islands 2,800 years ago.

And "now that we have discovered this hotspot of Adélie abundance here in the Danger Islands, we want to be able to protect it, and that involves trying to understand why the populations may have changed," Lynch said.