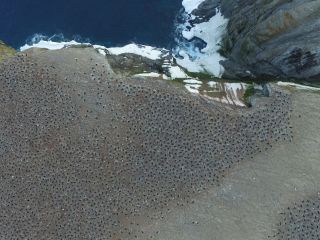 Explorers beware: The Danger Islands — a remote handful of rocks huddled among sheets of treacherous sea ice near the northern tip of the Antarctic Peninsula — are full of penguins. One might not imagine penguins to be dangerous per se, but then again, one has probably never seen (or smelled) 1.5 million of them breeding at once. According to a new paper published today (March 2) in the journal Scientific Reports, that's about how many Adélie penguins were recently found nesting in a previously unknown "supercolony" on the seldom-studied Danger Islands.

Discovered on an expedition led by researchers at the Woods Hole Oceanographic Institution (WHOI), the unexpected penguin metropolis marks one of the single largest Adélie colonies in the world (they are native only to Antarctica), and disputes previous observations that the penguins have been steadily dwindling in numbers for the past 40 years. [In Photos: The Adorable Adélie Penguins of Antarctica]

"Not only do the Danger Islands hold the largest population of Adélie penguins on the Antarctic Peninsula, they also appear to have not suffered the population declines found along the western side of the Antarctic Peninsula that are associated with recent climate change," study co-author Michael Polito, an assistant professor at Louisiana State University, said in a statement.

The team's discovery started, as many great discoveries do, with guano (that is, seabird poop).

While looking at NASA satellite imagery of the Danger Islands, researchers noticed significant guano stains on the rocks, pointing to the existence of some huge, unseen population of penguins. The researchers mounted an expedition in 2015 and, sure enough, encountered hundreds of thousands of Adélie penguins nesting in the rocky soil there.

The researchers tallied the penguin population using a combination of hand-counting, drone footage and a neural-net-counting program that analyzed massive composite photos of the island to pick out penguin nests from the surrounding scenery. The team's final tally: 751,527 penguin pairs — or slightly more than 1.5 million birds.

The discovery of this unexpected penguin-opolis is optimistic news for scientists who have observed Adélie penguin populations steadily declining in Antarctica for the past 40 years, the new study noted. The colony's existence on such a remote island, however, provides more questions than answers.

"The population of Adélies on the east side of the Antarctic Peninsula is different from what we see on the west side," study co-author Stephanie Jenouvrier, a seabird ecologist at WHOI, said in the statement. "Is it linked to the extended sea ice condition over there? Food availability? That's something we don't know."

What researchers do know, at least, is that there is yet one more reason (or rather, 1,500,000 more reasons) to enshrine the waters near the Antarctic Peninsula as a marine-protected area (MPA) — a region where human activity is legally limited for conservation purposes. A proposal to recognize the Danger Islands area as an MPA is currently under consideration by the international Commission for the Conservation of the Antarctic Marine Living Resources.