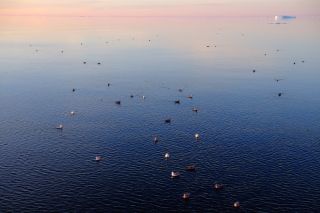 During the summer months, birds that migrate to the Arctic leave bird poop, or guano, which, after undergoing several chemical reactions, can influence cloud properties.
(Image: © Alex Moravek)

Bird poop is a messy nuisance in the Arctic, but the droppings from seabirds actually have a beneficial effect: slightly cooling the region threatened by climate change, a new study finds.

In short, chemical reactions that are set in motion by the bird droppings, or guano, change the properties of the clouds above, and make them more reflective, the researchers said.

"Clouds can actually reflect energy that's coming from the sun back to space, which is a cooling effect," said study co-lead researcher Betty Croft, a research associate in the Department of Physics and Atmospheric Science at Dalhousie University in Nova Scotia, Canada. [Images of Melt: Earth's Vanishing Ice]

However, Croft cautioned that although the newfound connection between bird droppings and summertime cooling is intriguing, it's minor and "not an effect that is going to counteract global warming."

Still, the researchers were surprised to learn that seabird excrement is likely a key player in the Arctic's climate, at least during the summer. Every year, usually between May and September, tens of millions of seabirds migrate to the Arctic to breed and raise their young, they said.

These seabirds eat seafood, which is chock-full of nitrogen, said study co-lead researcher Greg Wentworth, an atmospheric scientist with Alberta Environment and Parks, who did the research for his doctoral degree in chemistry at the University of Toronto.

A large portion of this nitrogen is defecated in the form of uric acid, Wentworth said. In the presence of water and oxygen, microbes can break down the uric acid into carbon dioxide and ammonia (gaseous nitrogen compound), he said.

This ammonia is key. Once it enters the atmosphere, it can react with other gases — specifically, sulfuric acid and water vapor — and create atmospheric particles. These particles are very small, just a couple of nanometers in diameter (a nanometer is 1 billionth of a meter), Croft said. But as they grow larger — to at least 50 to 80 nanometers, the molecules "can act as the seeds for cloud droplet formation," she said.

These molecules do not form new clouds, Croft said. Rather, they affect existing clouds. As more of these newly formed atmospheric particles enter a cloud, then, so long as the water content in the cloud stays the same, the cloud will become more reflective, and "that's a cooling effect," Croft said.

However, the researchers have studied just one possible effect that guano can have on clouds. Although clouds can reflect the sun's energy, they can also trap energy released by the Earth, which can lead to a warming effect, the researchers said.

"There's a lot of work [that needs] to be done to understand the details before we could really understand what would be the overall effect [of the guano] in the climate system," Croft said.

But, now that researchers know that seabird guano plays a factor in climate cooling during the Arctic's summer months, it's more important than ever that people protect these migratory birds, the researchers said. [Quest for Survival: Photos of Incredible Animal Migrations]

"Given the accelerated rate of Arctic warming, seabird numbers and migratory patterns may change, altering the seabird-guano ammonia emissions in the Arctic," the researchers wrote in the study. "Thus, the relative importance of ammonia from seabird guano to the Arctic climate may be susceptible to future change."

The study was published online Tuesday (Nov. 15) in the journal Nature Communications.