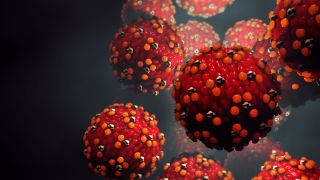 Our immune system is great at protecting us from the germs that surround us everyday — but every machine has its kinks.

One gene, which protects the body from autoimmune disorders (in which the body attacks itself), also helps secretly usher in viruses by making them undetectable. But how the story ends depends on how much virus is trying to get in, according to a new study published yesterday (Nov. 29) in the journal PLOS Biology.

This gene, called the adenosine deaminase acting on RNA 1, or ADAR1, protects the body from large amounts of the virus, but invites it in if only a small number of viruses knock on the door, the scientists found. [27 Devastating Infectious Diseases]

ADAR1 and the protein that it codes for, protects the body from attacking itself by finding and unzipping double-stranded RNA, a genetic relative of DNA, into single strands. RNA can come in both single and double-stranded forms, and plays multiple roles in the body.

It's unclear why double-stranded RNA activates the immune system in the first place, but it could go back to the origins of very early life on the planet, said senior author Roberto Cattaneo, a professor of biochemistry and molecular biology at the Mayo Clinic in Rochester, Minnesota.

One theory holds that primitive cells only held RNA as genetic material. Eventually, however, cells began using DNA, while viruses predominantly began encoding genetic information in RNA. (Not all viruses store their genetic information in RNA, some store them in DNA.) So "cells began to build up an innate immune system to defend themselves [and] to recognize double-stranded RNA as an intruder," Cattaneo told Live Science.

When the ADAR1 gene is defective, it can't transform some double-stranded RNA produced by the body into single-stranded RNA. The untouched double-strands then activate the immune system and can lead to an autoimmune disorder that affects infants called Aicardi-Goutiéres syndrome. This severe disorder causes problems in the brain, the immune system and the skin, according to the National Institute of Health.  But “patients who have a defect in this protein...in fact combat viruses pretty well,” Cattaneo said.

The team used the powerful gene editing tool CRISPR-CAS9 to delete ADAR1 in human cells in the lab, while leaving other cells intact. They then infected cells with either the functioning gene or the deleted gene with different amounts of a measles virus. (The measles virus stores its genetic information in RNA instead of DNA. And though the virus usually makes single-stranded RNA, it can make mistakes and form some double-stranded copies as well.) The team also infected the cells with a mutated measles virus that carried more double-stranded RNA and watched what happened.

Hachung Chung, a postdoctoral fellow at Rockefeller University in New York City, who was not involved in the research, said it’s important to now figure out the mechanisms that different forms of the ADAR1 gene use to transform viral double-stranded DNA.

Measles is not the only virus that can hijack the immune system, and Cattaneo said he hopes to determine the activation thresholds for other viruses, such as the yellow fever virus and the Chikungunya virus (which are both spread by mosquitoes). Modifying the threshold could potentially lead to antiviral treatment options, Cattaneo said.