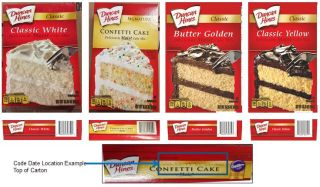 Some varieties of Duncan Hines instant cake mix are being recalled because they may contain a not-so-tasty ingredient: Salmonella.

On Monday (Nov. 5), Conagra Brands, the maker of Duncan Hines products, said in a statement that a sample of Duncan Hines Classic White cake mix had tested positive for Salmonella bacteria. The company is also working with federal health officials to investigate whether the product is linked to a Salmonella outbreak that has so far sickened five people in the United States.

However, the product has not been definitively linked to the outbreak, the statement said. But out of an abundance of caution, the company is voluntarily recalling some boxes of its Classic White cake mix, as well as some cake mixes that were made during the same time period, including Classic Butter Golden, Signature Confetti and Classic Yellow.

A list of the specific products being recalled is available here.

Consumers who have purchased the recalled products are being advised not to eat them and to return them to the store where they bought them.

The recall serves as a reminder not to eat raw batter, the company said. Indeed, among those sickened by the outbreak, some reported consuming cake mix before they got sick, and some may have consumed the batter raw, the statement said.

Tempting though it may be, raw batter can contain ingredients that carry a risk of bacterial contamination, including eggs, flour and, in this case, the cake mix itself. In 2016, General Mills recalled 10 million lbs. of flour after the product was linked with an E. coli outbreak. And this year, more than 200 million eggs produced by Rose Acre Farms were recalled after the product was tied to a Salmonella outbreak.

(Bacteria in batter is rendered harmless by baking, Conagra said. But prior to baking, there's still a risk that the products could "cross-contaminate" parts of the kitchen or utensils, and so consumers are also reminded to wash surfaces, utensils and their hands after they have contact with raw batter.)

Symptoms of Salmonella infection include diarrhea, fever and abdominal cramps that occur between 12 and 72 hours after infection, according to the Centers for Disease Control and Prevention. Symptoms of the infection usually last four to seven days, and most people recover without treatment. But in some cases, the diarrhea can be so severe that a person needs to be hospitalized. Severe Salmonella infections are most likely to occur in young children, older adults and people with weakened immune systems.