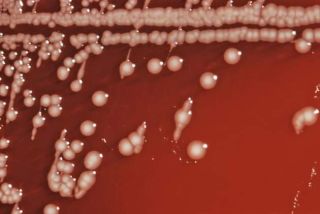 Salmonella is actually a group of bacteria. This one is called Salmonella arizonae.
(Image: © CDC)

The frequency with which gut-churning salmonella bacteria invade our food lately has all the elements of a bad movie plot that brings us to our knees and makes us hurl.

The FDA warned people this week to avoid all foods with pistachios until they can figure out the latest contamination. Only two people have been sickened so far but officials are concerned the problem may grow, according to news reports.

While they are not aliens, salmonella are tough. Last week we learned that salmonella sent into space became more virulent in the zero-g environment.

About 40,000 cases of salmonellosis are reported in the United States each year, according to the Centers for Disease Control and Prevention. Many milder cases are not reported, so the agency figures the real count may be 30 times higher. Most people just get a fever and an upset stomach. Some people show no symptoms at all. But "salmonella can cause serious and sometimes fatal infections in young children, frail or elderly people, and others with weakened immune systems," the FDA states.

What's with these bugs?

Salmonella are a group of different strains of bacteria that can contaminate almost any food, causing diarrhea, abdominal pain and fever. Scientists are still learning why the microbes are so problematic. One reason is that they have evolved tricks to get around the human immune system.

Infamous for clinging to cutting boards even after they've been washed, salmonella is now known also to lurk inside you, multiplying quietly, then striking only when it has built up a formidable and sickening force.

Scientists also just learned that salmonella find protection inside amoebas — which are ubiquitous on land and in water — perhaps one reason they spread so effectively.

Your best defenses, according to the CDC:

Reptiles, including turtles, are prone to pack salmonella on their skin. A 2004 study by Michigan researchers, reported in the journal Clinical Infectious Diseases, found that nearly 12 percent of salmonellosis cases in children up to age 5 were caused by reptiles.

Ducklings and chicks can pack it in their intestines and infect their surroundings. "Children can be exposed to the bacteria by simply holding, cuddling, or kissing the birds," according to the CDC.

Perching birds also can catch salmonella, and Virginia citizens have been reporting a significant number of deaths of birds common to bird feeding stations such as finches. Salmonella occurs in wildlife in regular cycles, and this appears to be in one of them, says Jim Parkhurst, a state wildlife specialist.

People handling contaminated bird seed can become infected with salmonellosis, especially if they have not thoroughly washed their hands after contact with products or surfaces potentially exposed to salmonella. Good sanitation with feeding stations is recommended for the sake of the birds and us.