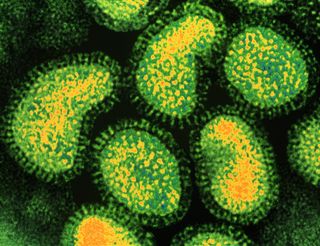 As flu season descends on the country, U.S. officials have announced the approval of a new drug to treat influenza — the first new flu drug in nearly two decades.

The drug, called Xofluza (generic name baloxavir marboxil), was approved by the Food and Drug Administration (FDA) for treatment of the flu in people ages 12 years and older who have had flu symptoms for less than 48 hours, the agency announced today (Oct. 24). It's taken as a single oral dose.

"This is the first new antiviral flu treatment with a novel mechanism of action approved by the FDA in nearly 20 years," FDA Commissioner Dr. Scott Gottlieb said in a statement. "With thousands of people getting the flu every year, and many people becoming seriously ill, having safe and effective treatment alternatives is critical. This novel drug provides an important, additional treatment option."

The approval is based on results from two studies of more than 1,800 people in which participants were assigned to take either Xofluza or a placebo, or either Xofluza or a different antiviral flu drug. One of the studies found that patients who took Xofluza within 48 hours of experiencing flu symptoms had their symptoms clear up more quickly, compared with those who took the placebo. The second study found that Xofluza worked just as well as the other antiviral drug at treating the flu.

The drug works by inhibiting an enzyme called polymerase acidic endonuclease, which is needed for the flu virus to replicate, according to the pharmaceutical company Roche, which holds the rights to commercialize the drug in most countries. (The drug was discovered by the Japanese company Shionogi & Co., Ltd.) This is different from how other flu drugs work. For example, the antiviral drug Tamiflu (oseltamivir phosphate) works by blocking a different enzyme needed for viral replication, called neuraminidase.

Overall, Xofluza appears to target an earlier step in the process of viral replication than Tamiful does, Live Science previously reported.

"Having more treatment options that work in different ways to attack the virus is important because flu viruses can become resistant to antiviral drugs," said Dr. Debra Birnkrant, director of the FDA's Division of Antiviral Products.

The FDA stressed that Xofluza and other antiviral flu drugs are not a substitute for getting a seasonal flu shot. "Yearly vaccination is the primary means of preventing and controlling flu outbreaks," Gottlieb said.