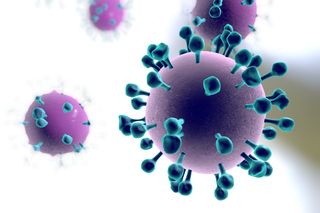 The flu shot stimulates immunity against a protein called hemagglutinin, which extends from the surface of the flu virus. Hemagglutinin (shown here as little spikes) has a "head" and a "stem."
(Image: © Kateryna Kon/Shutterstock)

A new type of flu vaccine that contains "ancestral" flu virus genes shows promise in providing broad protection against many different strains of the flu, according to an early study in animals.

In contrast, all of the mice that were given traditional flu shots got sick and died when exposed to the same lethal doses of flu.

Because the study was conducted in mice, it's too soon to say whether the vaccine would successfully work in humans. [6 Myths About the Flu Vaccine]

But the researchers hope that their approach might one day lead to a "universal" flu vaccine that would provide long-term protection against flu viruses. "The ultimate goal is to be able to vaccinate once and provide lifelong protection," lead study author Eric Weaver, an assistant professor at the University of Nebraska-Lincoln, said in a statement.

Because flu viruses mutate rapidly, researchers have found it difficult to develop a flu vaccine with long-term protection. Currently, researchers develop a new seasonal flu vaccine every year based on which flu strains they predict will be circulating in the fall and winter.

A number of researchers are investigating different strategies to make a universal flu shot, including developing vaccines that target the "stem" of the hemagglutinin protein (which tends to change less from season to season) rather than the head.

But in the new study, the researchers took a different approach. Their vaccine contains "ancestral" or "consensus" flu genes from the four major flu strain types: H1, H2, H3 and H5. These are genes that represent common or ancestral sequences shared by many different flu viruses.

To deliver these genes to the mice in the study, the researchers used an adenovirus, which causes the common cold, that had been altered so it was harmless and could carry the four ancestral genes.

After vaccinating the mice, the researchers infected them with nine strains of the flu — including strains of H1N1, H3N1, H3N2 and H5N1— at a dose that typically kills mice. But 100 percent of the vaccinated mice survived infection with seven out of the nine flu viruses given at typically lethal doses, the study found.

However, future studies in animals will be needed to better determine the safety and efficacy of the vaccine.

The study was published yesterday (Nov. 2) in the journal Scientific Reports.