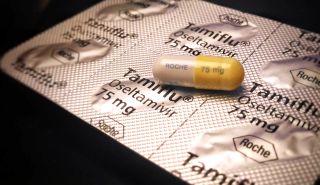 A 6-year-old girl in Allen, Texas, experienced troubling symptoms — including hallucinations and what might have been an attempt to hurt herself — after taking the common flu medication Tamiflu, according to news reports.

Tamiflu (generic name: oseltamivir) is an antiviral drug used to treat the flu. Antiviral drugs can lessen a person's symptoms and shorten the length of the illness by one to two days, according to the Centers for Disease Control and Prevention (CDC).

The girl's family told local news station CBS-11 Dallas Fort Worth on Jan. 12 that after taking the medication, she hallucinated, ran away from school and nearly jumped out of a second-story window before her mother caught her.

It's not clear exactly how Tamiflu triggers this specific kind of episode. But medical experts caution patients against focusing too much on what is likely an ultra-rare side effect of the drug.

In very rare cases, Tamiflu has been linked to psychiatric events. In these unusual instances, reported mostly in Japan, young patients briefly developed, and then recovered from, sudden psychoses, according to Drugs.com.

Doctors know that these kinds of risks exist when they prescribe medications, said Dr. Daniel Summers, a Boston-area pediatrician. [Flu Shot Facts and Side Effects, Updated for 2017-2018]

"Pretty much every single thing we do in health, at least at some level, has a risk," Summers told Live Science. "In most of those cases, the risk is relatively small, but it's going to be there with anything we recommend or prescribe, even if the risk is really slight."

Indeed, balancing possible risks against likely benefits to figure out how best to care for each patient is an important aspect of medicine.

"In this case, there is a small risk of some bizarre, outlying reaction," Summers said. "But the risk of that happening is really pretty small, and if I were to prescribe [Tamiflu] to a patient, it would be because I think the clinical benefit is substantial enough to offset whatever concern I have."

However, Summers added that he usually avoids prescribing Tamiflu in particular — though not because of the bizarre outlier risk of psychosis.

A problem with Tamiflu for some people is that it works best when it's given in the very early stages of influenza (before most patients make it to a doctor), and even then, the benefits for most patients aren't all that great, Summers said. When Summers does prescribe the drug, it's usually for patients for whom it's extra-important that their flu symptoms remain controlled, he said.

"I'm more likely to prescribe it for patients, for example, with asthma, diabetes [or] other chronic conditions where we would have a concern that their health is already somewhat compromised and flu could tip them into a more severe illness," he said.

The CDC recommends giving antiviral drugs to people who have a high risk of developing serious complications from the flu, including very young children, people over age 65 and people with chronic health conditions. "Most people who are otherwise healthy and get the flu do not need to be treated with antiviral drugs," the CDC says.