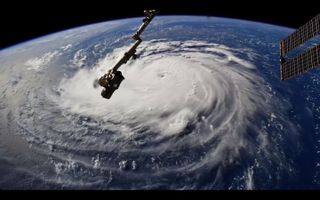 When this image was captured by cameras outside the International Space Station, the morning of Sept. 10, Hurricane Florence had maximum sustained winds reaching 115 mph. The ISS was flying about 255 miles above the storm when the video (still shown here) was captured.
(Image: © NASA)

Hurricane Florence, currently a Category 4 storm, may strengthen to a Category 5 hurricane before weakening again on its approach toward the North or South Carolina coastlines.

But regardless of the wind speeds when the hurricane makes landfall — expected on Thursday (Sept. 13) — it will bring with it massive amounts of moisture and hazards for anyone in its path, meteorologists say.

The current intensification is being driven by warm, moist air and a favorable atmosphere, said Joel Cline, a tropical program coordinator at the NHC. It's a continuation of the rapid strengthening seen yesterday, when the hurricane moved out of destabilizing air currents and into conditions ripe for a monster storm.

Until yesterday, Cline said, the hurricane had been traveling through a pressure trough that generated a lot of shear — essentially, winds in the upper levels of the atmosphere traveling at different speeds than winds at lower levels. Shear is bad for hurricanes, which basically act like enormous chimneys, Cline said: They draw in huge amounts of moist air from the ocean's surface and then vent that air out of their tops. If this chimney hits wind shear and gets knocked out of its vertical orientation, the hurricane has a tough time fueling itself, and it's unlikely to intensify.

But once Florence moved away from that trough and the relatively dry air around it, the situation changed. Without shear, the storm could stack up vertically and start hoovering up moist air.

"When that happens, you have a very efficient machine," Cline told Live Science.

Today, Florence is still sitting over warm, moist waters, which are fueling its howling winds. As the storm approaches the East Coast of the United States, it will start drawing drier air from over land, Cline said. That will tend to weaken Florence, but the NHC forecasts that the storm will be "an extremely dangerous major hurricane through landfall."

Storms that remain Category 5 at landfall are relatively rare, though 2017 saw two storms do so (Maria, which hit Dominica, and Irma, which was a Category 5 hurricane when it hit Cuba, Barbuda, Saint Martin and the British Virgin Islands). Hurricanes Dean and Felix hit Quintana Roo, Mexico; and Nicaragua, respectively, at Category 5 strength in 2007. The last storm to hit the United States at Category 5 strength was Hurricane Andrew, in 1992. Hurricane Camille, in 1969, and the 1935 "Labor Day" Hurricane are the only two other storms known to have made landfall at that strength in the United States.

Even without the extreme wind speeds of a Category 5 storm, though, Hurricane Florence is likely to be a serious and life-threatening storm, Cline said. The NHC forecasts storm surges of between 2 and 12 feet (0.6 to 3.7 meters) along the East Coast; the size of the storm surge can vary greatly depending on whether the storm hits at high tide and the geography of the area where it makes landfall, Cline said. The storm will likely dump between 20 and 30 inches (50 to 76 centimeters) of rain over its track, causing serious flooding. This could be exacerbated by a slowing or stalling of the storm as it reaches the coast.

The hazards are likely to extend far from the coast, Cline said. As the hurricane's warm, moist air piles up against the Appalachian Mountains, that moist air will be driven upward, where it will condense and fall as rain. What rain falls inland will end up as floodwaters rushing back toward the sea.