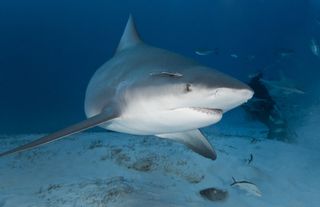 A Texas man was bitten by a what was likely a bull shark (Carcharhinus leucas). The bite wound became infected by flesh-eating bacteria.
(Image: © Shutterstock)

A Texas man who survived a shark bite earlier this month has since developed a "flesh-eating" bacteria infection in his wounds, according to news reports.

In the late morning of Aug. 9, Blaine Shelton, a 42-year-old construction worker, was enjoying a solo dip in the warm water of the Gulf of Mexico, about 200 yards (183 meters) from the shore at Crystal Beach, Texas, local news station KHOU11 reported. But his refreshing swim was painfully interrupted when a shark suddenly attacked him, biting him just above his knee.

"I already saw the fin, and I knew it wasn't a porpoise," Shelton told KHOU11. "So, I turn around to get out of there, and that's when he grabbed me by the leg. And I guess the only way to explain it would be like sandpaper, is what it felt like; just grabbed on, like gritty." [In Photos: Underwater Cameras Capture World's Sharks]

Fortunately, he was able to swim to shore and with the help of a friend, he flagged down a Galveston County Sheriff's deputy who was patrolling the area. Shelton told USA Today that based on the bite mark, an expert guessed that a 7-foot bull shark (Carcharhinus leucas) had bitten him.

Bull sharks average between 200 and 290 lbs. (91 and 132 kilograms) and grow to about 7.5 to 8 feet long (2.3 to 2.4 m), according to the University of Florida's Florida Museum. They're common in the coastal waters of Texas, according to Texas Parks and Wildlife, and unlike most sharks, they can live in both fresh and saltwater.

Shelton was treated at the University of Texas Medical Branch in Galveston for four days before being sent home to recover, KHOU11 reported. But a few days later, his wound was painfully aching, so he returned to the hospital.

"You see all that dried stuff right there? That's what was dying," Shelton told KHOU11, as he pointed to the tissue around his wound that flesh-eating bacteria had infected.

Shelton was likely infected by Vibrio vulnificus, a species of bacteria that thrives in warm, coastal seawater, just like what is found on the Gulf Coast of Texas. V. Vulnificus is often called flesh-eating bacteriabecause when it infects a wound, it causes the skin and surrounding tissue to gruesomely break down and die, a condition called necrotizing fasciitis. If not treated immediately, the infection can be fatal.

"I'd heard there was bacteria in the water; I just never treated it serious," Shelton told KHOU11. "But to tell you the truth, if you've got a scratch on your arm or your leg, I wouldn't get in that water."

"Seawater is teeming with bacteria and viruses and all sorts of things," Craig Baker-Austin, a marine microbiologist at the Centre for Environment Fisheries and Aquaculture Science in the United Kingdom, previously told Live Science. People with any kind of open wound, cut or abrasion have a "portal of entry" for the bacteria, he said, so they need to minimize their exposure to seawater.