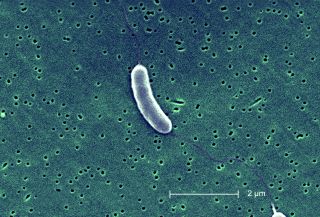 It's that time of the year again: when the weather is warm, and people are swarming the beach. That means it's also the time of year when doctors see a sharp rise in a certain type of "flesh-eating" bacterial infections called vibriosis.

These infections are caused by Vibrio bacteria, which thrive in warm, coastal seawater and often infect widely consumed shellfish species, like oysters. Scientists warn that as climate change causes an increase in sea surface temperatures and a rise in sea levels, Vibrio infections will become more common. This is because warmer, rising waters create an even more welcoming evironment for the deadly pathogen.

There are more than 70 species of Vibrio, with 12 of them recognized as human pathogens, according to the Centers for Disease Control and Prevention (CDC). But only two of those 12 are responsible for the majority of infections in beachgoers and raw-shellfish consumers: V. vulnificus and V.  parahaemolyticus. [5 Ways Climate Change Will affect Your Health]

"V. vulnificus is the one that causes the highest number of [deaths] and is often associated with wound infections," said Kimberly Reece, a marine microbiologist at the Virginia Institute of Marine Science. V. vulnificus is often called flesh-eating bacteria because when it infects a wound, it causes the skin and surrounding tissue to gruesomely break down and die. (Medically, this is called necrotizing fasciitis.)

V.  parahaemolyticus, on the other hand, is the species more often found in shellfish, and although it causes more vibriosis cases, it's not as deadly as V. vulnificus, Reece said. Typically, people who get vibriosis from shellfish may experience such symptoms as gastrointestinal discomfort (diarrhea and vomiting), but if they're otherwise healthy, they will generally recover within a few days.

However, the infection is hardest on people with compromised immune systems or pre-existing diseases. People with an already weakened immune system can become seriously ill and die from both types of Vibrio infections. According to the CDC, vibriosis kills about 1 in 4 people who contract it, sometimes within only one or two days.

Thriving in the heat

"We're seeing more of these infections early on in the season and later in the season," said Craig Baker-Austin, a marine microbiologist at the Centre for Environment Fisheries and Aquaculture Science in the United Kingdom.

Vibrio is one of the only pathogens with increasing rates of illness in the U.S. Between 1996 and 2005, the average incidence of vibriosis in the southeastern U.S. increased by more than 80 percent, according to a recent study in the journal Estuaries and Coasts.

The same study described a clear relationship between increased Vibrio concentrations in waters off the southeast coast of the U.S., and increased salinity and temperature. But the researchers found that sea level rise is likely to have the biggest influence on increased rates of infections. That's because Vibrio thrives in brackish water, or water that's just slightly salty, such as marshes, estuaries and other coastal regions. As the sea level rises, the ocean's salt water will penetrate farther into freshwater rivers and streams, creating more habitat for Vibrio.

Baker-Austin told Live Science that with climate change, "we're also seeing more extreme weather events, and those can play a big role" in Vibrio proliferation. For example, he said, after Hurricane Katrina in 2005, there was a lot of salt water and fresh water mixed together, and people were wading through it. Because of that, Baker-Austin said, there was a marked increase in vibriosis cases in the region.

Higher latitudes are also experiencing warmer coastal temperatures, which means the geographical range of Vibrio is likely to expand. "I think the most important thing is to recognize that with climate change, you might start to see Vibrio infections in regions where you haven't seen [them] before," Reece told Live Science.

Even though the rate of Vibrio infections is increasing, said Baker-Austin, "it's worth highlighting that they're very rare infections." In 2017, the CDC estimated that, in the U.S., about 80,000 people become infected by Vibrio bacteria each year, and about 100 people die from the infection. For reference, about 400 times more people were infected with the influenza virus in U.S. than were infected with Vibrio bacteria.

Still, both microbiologists told Live Science that it's important to stay vigilant about the risks of vibriosis.

"Seawater is teeming with bacteria and viruses and all sorts of things," Baker-Austin said. People with any kind of open wound, cut or abrasion have a "portal of entry" for the bacteria, he said, so they need to minimize their exposure to seawater.

"People have to be aware of their own health," Reece said. For example, she said, people who are taking certain medications or have compromised immune systems should make sure their shellfish are thoroughly cooked, which kills the potentially harmful bacteria.

Reece also noted that the shellfish industry is working hard to prevent infection by keeping the shellfish at lower temperatures that prevent the bacteria from multiplying. "They're doing a very good job, and they recognize that's really important," she said.

But as Baker-Austin said, "There's more people living by the sea, more people coming into contact with seawater and more people with underlying risk conditions." Those factors, together with the overall trend of warming seawater and rising seas, mean these heat-loving bacteria are likely to continue to cause more and more vibriosis cases every year. But understanding the risks of infection and taking the appropriate steps to avoid those risks can prevent infection and save your life.