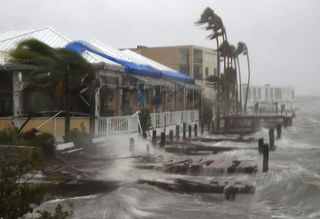 SAN FRANCISCO — About one-quarter of the world's population lives in coastal areas that will be unlivable by the year 2100 because of rising sea levels, researchers say.

In a special issue of the journal Earth's Future, coastal scientists and engineers detailed projections for sea-level rise for the year 2100, and described their model Monday (Dec. 12) here at the annual meeting of the American Geophysical Union.

Sea-level rise is a global phenomenon, with more than 130 cities with populations of 1 million people or more along vulnerable coasts, said Robert Nicholls, a professor of coastal engineering at the University of Southampton in the U.K. [Images of Melt: Earth's Vanishing Ice]

"To really understand how this might be impacted by sea-level rise, or other kinds of change, we need to understand all of the different scales and how they interact," Nicholls said. "That's what we've been doing in this big project."

The Earth's Future research project focused on creating a new model for sea-level rise that takes a more holistic approach in considering factors that will impact coastal communities, the scientists said. The traditional "bathtub model" — which simply raises water a certain height based on estimated ice melt — takes into account only rising water levels. In their new study, researchers built a model that considers not only rising water levels, but also incorporates the impacts of tides, storm surges, coastal infrastructure and defense frameworks (such as dikes).

What they found was a much more dynamic picture of how coastal communities will be affected by rising seas. Predictions typically look 50 to 100 years into the future, when the coastal systems will have changed dramatically, said Scott Hagen, director of the Louisiana State University Center for Coastal Resiliency.

For instance, models show that if sea levels rose 6.6 feet (2 meters) — the general estimation by scientists for sea-level rise if if carbon dioxide emissions continue — for a salt marsh along the coast of Louisiana, much of the marsh area would become open water by 2100.

"When that marsh is converted to open water, then what we can consider is that a hurricane storm surge can move more freely, farther into that coastal land," Hagen said. "Knowing what's happening at these salt marsh regions is really important for us to understand the ecosystem impacts of sea-level rise in general, and climate change as a whole."

In a developed area, such as Bangladesh (one of the most vulnerable areas to sea-level rise, according to Nicholls), the new model included such systems as pollution and land use, and even poverty and health, to determine risk.

Nicholls said such considerations as the deterioration of dikes will drastically change the sea-level rise prediction. A side-by-side comparison with the traditional model showed that the new systematic model determined there could be much wider, and more devastating flooding.

"You can see that it's a rather different picture from the bathtub model, the area could easily be flooded so much more," Nicholls said. "This is just one realization of what might happen, there are a lot of different pathways. But the point is that you're getting a much richer, more detailed picture of what might happen."