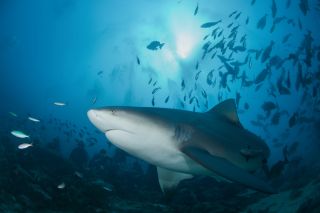 Think sharks live only in the ocean? Think again.

An 8-foot-long (2.4 meters) bull shark was pulled from the Potomac River, along the mid-Atlantic coast of the United States, by a group of Maryland fishermen yesterday (Sept. 3). But experts aren't at all surprised.

While you may think of sharks as ocean-dwelling predators, the reality is more complicated. Sharks do roam the open sea, but certain species, including the bull shark, also live in brackish (low-salinity) water and freshwater. So, finding one of these fish in the Potomac is "actually pretty normal," said Paul Genovese, a program manager for the fisheries service at the Maryland Department of Natural Resources. [On the Brink: A Gallery of Wild Sharks]

The shark caught yesterday was found in a large net off the shore of Coltons Point, Maryland, which is located right at the mouth of the Potomac, where the river opens into the Chesapeake Bay. In 2013, a fisherman pulled two bull sharks out of his nets at the nearby Point Lookout State Park.

The sharks don't live in the Potomac (or in the Chesapeake) year-round, Genovese told Live Science. The species' presence in the bay and its tributaries is sporadic enough that the Department of Natural Resources doesn't keep tabs on them, he added. It should also be noted that there has never been a reported shark attack in the Chesapeake Bay, nor in the Potomac River.

Bull sharks come through the Chesapeake in late summer for the same reason most human tourists do: The water is warm, and the food is good. Bull sharks live in tropical and subtropical waters, where they feed on large species of fish, such as menhaden, which also frequent Maryland's waters this time of year.

Local fishermen set large traps known as pound nets to catch menhaden and other seasonally abundant fish. The sharks follow their prey into these traps, and if they're not rescued within a few hours, they can die there, said Alan Henningsen, a research specialist at the National Aquarium in Baltimore.

It's a commonly held belief that sharks need to swim continuously in order to breathe, but Henningsen said this isn't true. The bull shark is one of several species that can rest for short periods of time before it needs to swim again to breathe, he said. That explains why one of the bull sharks hauled from the Potomac in 2013 was still alive when it was found in a pound net (though it died shortly after fishermen pulled it from the water).

Bull sharks can not only stay put in the water but also survive in low-salinity and freshwaterhabitats, thanks to a physiological process known as osmoregulation, which helps them balance out the levels of salt and other compounds in their bodies, Henningsen said. When a bull shark goes from salty water to freshwater, it maintains the appropriate amount of salt inside its own body by excreting some of that salt through a specialized rectal gland.

The bull shark's ability to regulate its internal fluids is crucial to its success as a freshwater predator. These sharks are found in rivers and lakes in Africa, Australia and other parts of the world, said Henningsen, and the cold water of the Potomac River in the winter months means bull sharks can't live there year-round.

However, there's nothing stopping bull sharks from venturing further up the Potomac (perhaps all the way to Washington, D.C.) except for physical barriers that obstruct their passage, Henningsen noted. In 1937, two fishermen in Alton, Illinois, a town just north of St. Louis, caught a bull shark in a trap. The shark was a long, long way from the river's mouth at the Gulf of Mexico.