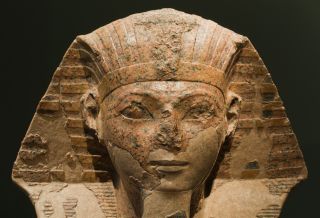 A sphinx with the face of Queen Hatshepsut.
(Image: © Miguel Cabezón | Shutterstock)

Hatshepsut was a female pharaoh of Egypt. She reigned between 1473 and 1458 B.C. Her name means “foremost of noblewomen.”

Her rule was relatively peaceful and she was able to launch a building program that would see the construction of a great temple at Deir el-Bahari at Luxor. She also launched a successful sea voyage to the land of Punt, a place located somewhere on the northeast coast of Africa, where they traded with the inhabitants, bringing back “marvels.”

Despite the apparent success of her reign, and a burial in the Valley of the Kings, her monuments would be defaced after her death, apparently by her co-ruler and step-son/nephew Thutmose III.

The fact that a woman became pharaoh of Egypt was very unusual. “In the history of Egypt during the dynastic period (3000 to 332 B.C.) there were only two or three women who managed to rule as pharaohs, rather than wielding power as the ‘great wife’ of a male king,” writes Egyptologist Ian Shaw in his book "Exploring Ancient Egypt" (Oxford University Press, 2003).

Hatshepsut, along with her sister Nefrubity, was the daughter of Pharaoh Thutmose I and his wife Ahmose. Thutmose I was a warrior king who launched successful campaigns into Nubia and Syria, expanding the territory under Egyptian rule.

After Hatshepsut became co-ruler of Egypt, she claimed to be of divine birth, the result of a union between her mother and the god Amun. She also claimed that Thutmose I had named her as his successor before his death.

“Underscoring her claim, one of the reliefs decorating Hatshepsut’s enormous funerary complex depicts Thutmose I crowning her daughter as king in the presence of the Egyptian gods,” write Helen Gardner and Fred Kleiner in "Gardner’s Art Through the Ages: The Western Perspective" (Cengage, 2010).

After the death of her father, the Egyptian throne passed to Thutmose II, Hatshepsut’s half-brother and husband. In ancient Egypt, it was not unusual for royalty to marry within their family. Like his predecessor, he fought in Nubia. “The Egyptian army continued to quell uprisings in Nubia and brought about the final demise of the kingdom of Kush at Kerma,” writes Betsy Bryan in a section of "The Oxford History of Ancient Egypt" (Oxford University Press, 2000).

In their personal life, the couple had a daughter named Neferure who would go on to assume royal duties. She “appears during her mother’s reign officiating as ‘God’s Wife of Amun’...”writes Michael Rice in "Who’s Who in Ancient Egypt" (Routledge, 1999).

Regency and elevation to pharaoh

With the death of Thutmose II, the throne fell to Thutmose III, a step-son and nephew of Hatshepsut. He was, however, a child and unable to rule Egypt, leaving Hatshepsut to serve as regent. She did this for three years until, for reasons unknown, she became a pharaoh in her own right (although technically a co-ruler with Thutmose III).

She took on a full throne name, and statues were created depicting her as a male king, right down to the beard. However, she did allow some feminine traits to come through. “Although for most of her reign Hatshepsut was depicted with the traditional image of a male king, the names that she used as king were formed with grammatically feminine participles, thus openly acknowledging her female status,” write Gay Robins in a 1999 article in "The Journal of Egyptian Archaeology."

In addition, University of Toronto Professor Mary-Ann Pouls Wegner, whose team found a wooden statue at Abydos that may be of Hatshepsut, notes that her waist was depicted as being somewhat slimmer than her male counterparts.

"Even though she was portrayed as a man in her [statues], oftentimes they did give a nod to her female physique by making her waist narrower," she is quoted as saying in a LiveScience article.

In addition, Hatshepsut appears to have taken care to cultivate loyalty and obedience among officials. Bryan notes that there was a “sudden increase in large decorated private tombs” at Luxor and Saqqara, and an inscription carved in her temple at Deir el-Bahari reads “he who shall do her homage shall live; he who shall speak evil in blasphemy of her Majesty shall die.”

“As a ruler, Hatshepsut inaugurated building projects that far outstripped those of her predecessors,” Bryan writes, noting that in conquered Nubia, she built monuments at a number of sites, including Qasr Ibrim, Semna, Faras and Buhen.

In Egypt proper, she launched a number of building projects. At the temple complex of Karnak, she erected a series of obelisks and built a “Palace of Ma’at,” a rectangular structure that was composed of "a series of small rooms with a large central hall for the placement of the central bark [a small ceremonial boat]. The walls of the palace were covered with carved and brightly painted relief scenes of Hatshepsut and Thutmose III,” writes a team of UCLA researchers working on the Digital Karnak Project.

Perhaps the most impressive architectural achievement of Hatshepsut’s builders is the temple at Deir el-Bahari. Shaw notes that its ancient name was djeser-djeseru “the most sacred of sacred places,” with its three colonnaded terraces leading to a sanctuary.

When archaeologists excavated the temple in the 19th century, Shaw notes, they found shrines dedicated to Hathor and Anubis. Shaw writes that they also found, on the lowest terrace, a relief showing Hatshepsut as a sphinx “triumphing over her enemies” and another “describing the quarrying and transportation of two granite obelisks from the quarries at Aswan.” He also notes that the middle terrace contains an “unusual group of painted reliefs” showing a trading expedition to the land of Punt.

This voyage to Punt (also known as “God’s land”) was a key foreign relations triumph during Hatshepsut’s reign. Punt is believed to lie in northeastern Africa, somewhere in the area of Eritrea, Ethiopia and southern Sudan. Egyptians had made voyages to it for centuries by Hatshepsut’s time.

The depiction of Punt at the Deir el-Bahari temple shows “scenes of the Puntite’s village (with) conical reed-built huts built on poles above the ground, entered via ladders,” Shaw writes, adding that palms and myrrh trees can be seen. “The ruler of Punt is distinguished from the Egyptians primarily by his beard and unusual costume, and his wife is depicted as an extremely obese woman.”

An ancient record of the voyage indicates that it was wildly successful. “The loading of the ships very heavily with marvels of the country of Punt; all goodly fragrant woods of God’s-land, heaps of myrrh-resin with fresh myrrh trees, with ebony, and pure ivory, with green gold of Emu.”

After listing more goods, the record concludes that no Egyptian ruler had ever been so successful in Punt. “Never was brought the like of this for any king who had been since the beginning.” (Inscription from "Seagoing Ships and Seamanship in the Bronze Age Levant," Shelley Wachsmann, Texas A & M University Press, 2009)

Thutmose III, who was technically co-ruler with Hatshepsut, succeeded the female pharaoh after her death. Although Hatshepsut was given a burial in the Valley of the Kings, her memory was not honored.

“Soon after her death in 1457 B.C., Hatshepsut's monuments were attacked, her statues dragged down and smashed and her image and titles defaced,” writes Egyptologist Joyce Tyldesley in a 2011 BBC article. She argues that this may have been an attempt by Thutmose III to gain credit for some of the successes Hatshepsut experienced during her rule. “By removing all obvious references to his co-ruler Tuthmosis could incorporate her reign into his own. He would then become Egypt's greatest pharaoh.”

In 2007, researchers announced that Hatshepsut’s mummy had been identified in tomb KV 60 in the Valley of the Kings. A “CT scan of a single tooth in a box with Hatshepsut’s name on it perfectly matched a tooth socket in the mummy’s jaw,” writes Cornell University anthropologist Meredith Small in a LiveScience article. She notes that she was around 50 when she died, balding, suffering from diabetes and wearing black and red nail polish. She also had a desire for perfume.

Small writes that despite her health problems, and the post-mortem destruction of some of her images, history still remembers her as a successful ancient Egyptian ruler. “Hatshepsut’s image couldn’t be erased because even with the weight, the beard, and the nail polish, she was a ruler, and a grand one,” she writes. “In ancient Egypt, just like today, you simply can’t keep a good woman down.”