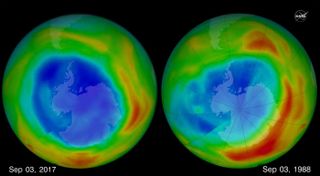 The hole in Earth's protective ozone layer that forms over Antarctica each September was the smallest seen since 1988, according to NASA and NOAA.
(Image: © NASA's Goddard Space Flight Center/Kathryn Mersmann)

A blockbuster study published in the journal Nature yesterday (May 16) revealed that for the first time since the 1980s, ozone-depleting chlorofluorocarbons (CFCs) have ticked sharply upward in the atmosphere — suggesting a new source. Here's the thing though: Not only do scientists have no idea what that new source is, it doesn't make much sense that someone would decide to pump out CFCs again. That's because there are numerous, inexpensive alternatives to CFCs that work just as well.

As The Washington Post explained in its detailed report on the study, global CFC production has been near zero since the materials were banned in the 1987 Montreal Protocol. Overall, atmospheric CFCs are still declining, and the ozone layer is still replenishing itself. But the new source has slowed that process significantly, and scientists find the situation completely baffling, said John L. Ferry, an environmental chemist at the University of South Carolina. [Infographic: Earth's Atmosphere from Top to Bottom]

CFCs are molecules made up of carbon atoms linked to chlorine and fluorine atoms, halogen elements that render the molecule volatile but particularly nonreactive, Ferry told Live Science. Volatile chemicals, meaning chemicals that evaporate easily, are important in foaming devices like fire extinguishers and devices that cool air, like refrigerators and air conditioners.

"The original refrigerants ... were ammonia or butane," Ferry said. "One of them is very, very toxic — ammonia — so we needed a replacement that was nontoxic. And the other one was very, very flammable: butane."

CFCs were special because they were neither flammable nor reactive enough to be toxic. They were enormously popular, until it turned out that high in the atmosphere they were breaking down. And all that loose chlorine was tearing up the ozone layer, ripping up the chemical bonds of high-flying molecules that protect Earth's surface from ultraviolet radiation.

Replacing CFCs was a challenge, Ferry said. Some alternatives turned out to be too reactive, causing cancers and other problems. And there's no single class of molecules that works in every situation in which CFCs were once used.

But today, Ferry said, "there's a ton of CFC replacements, just like there was more than one CFC."

And, mostly, those replacements do the job plenty well that CFCs once did.

That, along with the penalties for using CFCs, makes the discovery of a mysterious new source for one such chemical, CFC-11, particularly confusing.

"It just seems like a crazy material to be making on purpose anymore," he said.

Neither of the two primary CFC-11 use-cases, firefighting and refrigerators, are at all hampered today by not having the substance, Ferry said. He added that he couldn't think of any special use-case for the chemical for which there isn't already an alternative.

So, why would someone start using CFCs again?

"That's a hard question," Ferry said. "The trite answer is short-term gain. So, you imagine: What kind of situation would you be in? One that I could imagine would be if you had stocks of CFCs that you stored before the Montreal Protocol but never used."

It's feasible that some manufacturer, after time passed, would start using up their stock to cut prices, Ferry said.

But the sheer quantity of CFCs involved here, 28.6 million pounds (13 million kilograms) over a period of years, would represent an absolutely massive stockpile.

"It seems unreasonable, and makes me wonder about nonstandard stockpiles," he said.

The most likely candidate for such stockpiles would be natural ice formations. The world's ice is melting, and Ferry said that melting ice can release trapped chemicals into the air. But it seems unlikely, he said, that there's any ice out there that managed to trap only CFC-11 and not other CFCs.

That leaves the bizarre possibility that someone is actively manufacturing and using CFC-11 again, Ferry said. And that CFC factory would be difficult to track down. Given a large enough sample, he said, chemists might be able to analyze the CFC for signatures that would point to its origin. But with the substance loose and mixed up in the atmosphere, the collection task alone would be incredibly difficult, he said.

"That said, the analytical chemistry behind this is fantastic, and the people who've worked on this for decades — I have a lot of faith in these guys. If​ it's possible to find the stuff, we'll find it," Ferry said.

For the moment, though, the situation is deeply mysterious.

"Why would someone set up a factory to do just this​ when we know​ the consequences for that are negative? It seems crazy," Ferry said.